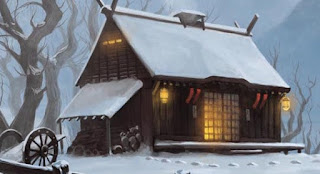 FOR EVERY PC THERE IS A SEASON

I posted earlier on the Family Creation system I’m using for our upcoming L5R campaign. That borrows heavily from John Wick’s Blood & Honor. The flow of the game will also borrow from that and The Great Pendragon Campaign. We will have adventures within a season and then move forward a season when we hit a break point. In between each of the characters will be able to choose a “seasonal action” representing where they put the bulk of their non-adventuring, non-duty hours. The group will also be able to suggest an action for their daimyo, which they may or may not do depending on their personality.

I will be borrowing much of the “structural system” for groups and areas from the excellent Legends of Angelerre. That game offers an easy and simple means of tracking and advancing those institutions without massive amounts of bookkeeping. The Province (and sub-groups in the province) may gain special aspects or even stunts- things like an Expert Architect who reduces costs. Most of these concepts I want to handle in the abstract. Some of your actions have a concrete benefit, but others (like staff training) offer intangible benefits like skills and aspects. Players can invoke or apply these when making argument or carrying out actions later.

Part of the reason I'm spending so much time on this is that I plan on adapting this eventually for an epic Fading Suns campaign, where players build a new family line within one of the Houses.

Act as Patron: You can commission an artisan or craftsman to create a work for you. This could be practical- a sword or armor are obvious. But you could also have a significant work of art crafted which could be used to gain honor, be given as a gift, or act as a temporary aspect for someone. The patronage also raises your reputation among artisans.

Construct Holding: Some holdings can be created after the campaign begins. These require several investments. Holdings will require wood, stone, and/or wealth in various ranges. Labor is assumed to be generally available. It also requires the investment of a certain number of seasonal actions by PCs and/or the daimyo. This represents the characters working and pushing attention on the project forward. Only one new holding may be under construction in a season. It may take longer than a season for something to be built. All new holdings begin at Rank One.

Diplomacy: Diplomacy happens all the time. This represents a specific mission to another family or clan with a particular objective defined by the player. Gifts and wealth can offer an advantage. The GM will set a difficulty and have a check or series of checks.

Espionage: There are several kinds of spies. The daimyo and the spy-master have access to all five types at the beginning of the campaign. All players can use and access the most basic type of spies- local spies who can report on general feeling, offer specific knowledge of the region, and give insight into specific problems. If another player wants to create their own network of spies outside the province, they will have to spend a seasonal action assembling it.

Friends and Festivals: The character can trade wealth for a positive reaction from a group or the population in general. Often this means investing in various local practices and celebrations. For example, if the player wishes to reduce peasant, merchant, or retainer unrest in one of the areas of the province. Alternately, the character may wish to curry favor with a particular group (monks of an order, peasants in a village, the family of a samurai). In this case the benefit will be more significant, but with a smaller group.

Group Training: Troops or other units may be trained. This can increase their effectiveness. General rank may be increased, or a particular role may be taught (for example training Ashigaru to be Ashigaru Archers). Larger groups with a pseudo-military role may also be trained (for example Magistrates or Road Wardens).

Healing: Characters who have taken Severe Wound consequences may spend a seasonal action to recovery. This can be done for either Physical or Composure consequences. You may also, with the GM’s permission, recover from Extreme Consequences, by taking this action and paying the points to rewrite the transformed aspect.

Improve Holding: You may raise the rank of an existing holding. In some cases, this simply means an expansion of benefits- more food, more bonuses, etc. You may also add aspects to holdings to give them a benefit if they come under fire. Adding an aspect is reasonably easy. Other developments cost more in wood, stone, and/or wealth in various ranges. They also require a certain number of seasonal actions by PCs and/or the daimyo.

Increase Troops: At the beginning of the campaign, the province has five points worth of troops. One for the daimyo household, and one each for the four sections of the province, NSEW. The number of troops can be increased with a base cost for recruitment, followed by increasing the upkeep costs each season. Particular types may be recruited as well.

Job Duties: Each character has a particular giri or duty. They are generally expected to be carrying that out. They may, as a seasonal action, focus on that duty to the exclusion of all else. This can be used to answer a question, create a temporary aspect, increase reputation, or have another benefit. The player and GM can negotiate on this.

Learn the Land: The character may travel and familiarize themselves with one of the four sections of the province. They may define a plot aspect based on that. Such aspects are permanent, but may require refreshing though actions.

Oversee: The character may push harder on a particular facet of the province- a mine, construction of a holding, a dojo’s training- to increase output, but at the risk of causing problems. The benefit will be proportional to the risk and costs.

Personal Training: This includes exercises, mediation, and prayer. You may change an existing non-trouble aspect on your character. Alternately, you may change up to three skills for other skills. You may also spend points to buy an ability, even without a learning experience. The GM may also allow you to add a temporary aspect for use in the following season (one with stress boxes). Most importantly, if you wish to increase your school rank, you must pay the points and take this action between seasons. Only one rank of a school may be purchased in a season.

Recruit Officer/Expert: At the start of the campaign, the key roles within the province are filled by the PCs, plus two NPCs. Seasonal actions may be spent tracking down, wooing, and recruiting new persons to the clan. This is a difficult challenge, as it often requires gaining their release from current service. Each character’s attempt to recruit generates successes towards the process. For example, a “Great” result would add +2 points to the total. The GM sets the difficulty of recruitment- and may allow players to opt out with a lesser success or press on for a greater result. This action can also be used to attract holding “persons” like Artisans. Alternately, players may use this to add a person who acts as an aspect or talent for the province (like an Architect who oversees construction and reduces holding building time).

Research: The character may spend time in research, uncovering a specific and permanent aspect to be added to something. This may replace existing aspects permanently. The GM and player can negotiate on this.

Romance: Courting your heart’s desire or, more likely, making arrangements for a favorable marriage for yourself or another person.

Staff Training: You may add or raise a skill for your “staff”. Alternately, you can add a temporary aspect to them. The more training done with them, the more stress boxes on the temporary aspect.

Stockpile: Making efforts to prepare for winter acts as an advantage when checking for spoilage, starvation, and family suffering in the Winter.

Trade: Generally the province generates no surplus wealth or more likely loses some. If the family wishes to generate some additional capital, a focused trade can convert goods into wealth. This gives a bonus to such exchanges, with other holdings acting as advantages.

War: Moving troops to skirmish with groups, either in defense of a particular area or to fight skirmishes with neighbors. Peasant rebellions, monster swarms, and/or organized bandits may require the use of this action to bring them to heel.
Posted by Lowell Francis at 1:28 PM