I read an interesting geeklist- Games that make character creation fun! -by Bazin and sparked a couple of thoughts about the process. I don't revel in character creation like I used to. When I first started playing D&D, I remember discovering that the game store had pads of character sheets on 4x6 heavy stock paper. I used to burn through those rolling people up; when the horrible orange-sheet books for AD&D came out, I bought those and did the same thing. But at some point, perhaps when "rolling up a toon" became more involved or actually required real work and thinking I stopped just doing character roll-ups for fun. Some that was the process, but more of it came from investing time and wanting to actually play the characters I created. Now I sublimate that desire through NPC creation- making up batches by randomizing elements, putting those together and coming up with stories that fit them. At least I know I can always get these characters out on the table.

Hollowpoint's another game that adds a twist to character creation- a fairly simple process. On the one hand player's get to come up with a set of crazy "traits" based on oddball questions ("That one time in Utah you took took a souvenir, it was this..."). These traits establish background, but act as a generic resource to get spent for effect later in the game. The trick is how to integrate those traits into the story. But Hollowpoint also asks each character to create a complication- a statement about the mission that makes it personal for them, provides a twist, or will create havoc later. That's a nice mechanism; because everyone's had to do this, you know there's a time-bomb under each player's seat.

Dread also uses questions (as do many other games), but unlike most games where the questions help you refine the rest of the process- the questions are the process. But the trick is that each player gets a distinct set of questions to build their character from. You can see an example of that here in a questions I put together for my horror version of The Hangover. In Dread each player fills in their questions and then if you can bring something from those answers into play, the GM may let you not have to make a test...which can be a significant advantage. The game makes for an amusing, Mad-Libs character creation process

The list includes the new Gamma World Roleplaying Game, which I'd be interested in if I wasn't gunshy about the 4e Engine. But I have many fond memories of rolling up exceptionally awful and non-sensical characters from the first Gamma World. Any of the classic "roll for random stuff" games could be great fun. The first two editions of Villains & Vigilantes had random super-power tables. The randomness made sense in GW, but for V&V half the struggle was trying to figure out how the bizarre mix of things actually made a character concept. Or you'd cheat and fudge the rolls. Even some classic fantasy games had elements that required some jiggering and adjustment. Old Empire of the Petal Throne made you roll for your background profession. The one time I got to roll up a character for that, I ended up with a baker. Stormbringer, the earliest of the Elric-setting rpgs, had players randomly for nationality. That then significantly affected their stats and limited what professions they could get...from the random profession table. 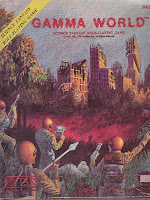 WALKING THE PATH
Having some randomness in character creation can be fun, but having rolls so absolutely determine a character's direction- I'm not sure I'm cool with that. Of course that leads into Old-School question of rolling and keeping the stats in order or actually placing them as you choose. Ideally, I want a balance between randomness and my ability to determine the role I want in the group. One approach I recall fondly is the use of Life Paths.

Classic Traveller's the best representation of this. That was another game where I loved making up characters- because while you sometimes got what you wanted, you often added in a lot of extra strangeness, depending on the supplements you used. Picking your career track and rolling for each year offered interesting benefits and the irritation of getting yet another free High Passage on a space freighter. Of course there was always the risk of getting your character killed in the process, which meant starting again from the beginning. I mentioned awhile back finding my old FASA Star Trek character sheet for the Klingons game I played. It pretty much stole the same process from Traveler. It was fun and I like that it put all those rolls on the front of the sheet.

Cyberpunk 2020 was the next game I remember offering a detailed background rolling system built into character creation. It was a fun system that they expanded in the various sourcebooks and in the Listen Up, You Primitive Screwheads!!!! supplement which added extra angst to your life. And, of course, there were generic supplements like Central Casting: Heroes for Tomorrow and Central Casting: Heroes of Legend (First Edition), intended to help players flesh out their characters in any game. Looking at those rules, I wonder if mechanics like these couldn't be used as a better way to get a player invested in a new setting. If the specific details and concepts of these kinds of tables couldn't be filled with material specific to that game world and even that campaign? It might be a tool to consider using. 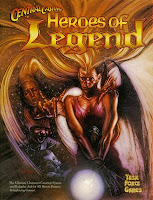 NOT ENOUGH POINTS!!!
One thing I've been thinking about is how scarcity might be used as a focus in character creation. Scarcity can change the value of a thing. We're used to GM's increasing some kinds of scarcity: fewer magic items, less treasure, rarer magical healing. Disadvantage systems offer a form of this- taking penalties to offset costs. But what about character creation and play systems that have built in scarcity?

For example, AMBER Diceless Role-Playing has a bidding system for the four stats, plus bonus stuff depending on the game. The GM runs a hidden bid auction, talking about how important a stat is (Strength, Warfare, Psyche, Endurance). The player who bids highest will be the best in that among the group- hands down. Then the other players get ranked below that according to their bids. Bottom line: their can be only one at the top. In a recent Fallout-inspired campaign, the GM made up lists of "Perks," from the VG to use as advantages. The trick was that any particular perk could only be taken by two players; after that no one else could buy it. He made that choose even tougher by dealing out experience in play with cards which could be traded. Some cards offered a special one-use bennie, some offered a new skill, some a new perk, some a stat raise and so on. For our homebrew, Action Cards, players have individually tailored decks for their characters. Normally they get to assign values, but for short-run campaigns, we've used a draft mechanic for making characters- which makes each card scarce.

Another kind of scarcity comes from limits or benefits imposed by the system itself. For example, in the Dead of Night rpg, players have four pairs of traits. You have points to spend on each pair- meaning that you have to consider the balance between them. So if you have a high Assault, you'll have a low Protect. Most GUMSHOE-system games determine points for CC based on the number of players. The rules specifically suggest that the group consult with one another to make sure all of the necessary investigation skills have been covered. Orpheus from White Wolf doesn't force the choice of roles on players- but the system instead rewards good behavior. Players can combine powers in play to get new and more interesting effects. In a way, the game uses incentives to reward diversity in the character creation process. That could extend over to games like D&D 4e where successful play at the table requires some specific builds with a group....

WHERE THE RULES FALL
Finally, there's the question of complexity. I've always believed that character creation's where the bulk of the complex rules for a game ought to fall. You only have to go through that process once (usually) and so you can afford to make that a little more time intensive. The rest of the system ought to be easier and less fiddly than character creation. But of course that gets in the way of pick-up game sunless you use pre-gen characters. And a complex character creation system can act as a barrier for entry to a system. I read a game recently that I really liked, but I had a seriously hard time wrapping my head around how to make a PC. In recent years I've seen CC as a process to "get through" to move on to the story. But Bazin's list and comments make me think- how can we make the CC process as much fun, as connected to the story, and as constructive to the group bonds as the rest of the campaign?
Posted by Lowell Francis at 12:15 PM