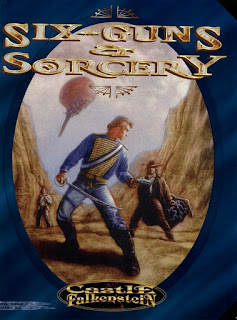 WHAT IS IT?
The North American Sourcebook for Castle Falkenstein.

OVERVIEW
Six-Guns & Sorcery is the second to last product R Talsorian released for the Castle Falkenstein line, and the only one I haven’t yet reviewed. It came out at a time when it looked like the game might move up to another level. They had a line of miniatures coming out as well as novels based on events from the series. However, that didn’t pan out- the miniatures, while echoing the art style of the books didn’t look that great- they were very two-dimensional. And the novels...well, they were pretty bad- at least I found them hard going. And that’s coming from someone who enjoyed the fiction of the rulebooks and liked the setting. As I’ve said before, I do have to wonder how Castle Falkenstein might have fared a few years later- with the rise of Steampunk as a genre and style. Part of me thinks it would have taken off- but another part doubts that. The kind of Steampunk we’ve seen in works like di Fillipo’s Steampunk Trilogy, Blaylock’s novels, China Mieville’s Perdido Street Station, and others lacks the shine of CF. The world is gritty, not polished. It is a festering place of the underclass subject to the whims of infernal machines more often than not. Castle Falkenstein is a Steam Age game, rather than a Steampunk one.

Six-Guns and Sorcery covers North America, and feels a lot like the truly excellent Book of Sigils. Again we have a volume framed as a travelogue, covering many different topics in the course of telling a story. We return to the characters of the core book- Tom Olam and company. I think SG&S benefits from not having had them be central to the other books- it feels like a welcome return. However, the book does fall on the side of game fiction over useful material for players- though that varies from section to section. There’s also some overlap with BoS and repetition of a couple of jokes here and there. But overall the volume’s worth reading- and fun. Some game books are bad reads, but have interesting ideas and material. Some are good reads, but lousy for use at the table. SG&S strikes a balance- fun and useful.

THE BOOK ITSELF
Six-Guns & Sorcery is the longest CF supplement- coming in at 176 pages. It is a massive and comprehensive book. The art’s strong and consistent throughout- R Talsorian went with a stable of artists who also worked on Deadlands and like materials. It feels right- and fits with the rest of the line. The layout’s up to the usual standards. Most pages are either two column or else one column with a sidebar or sidebar illustration. The R Talsorian habit of switching font sizes from section to section is in full bloom here. Some of the text is teeny, tiny. That’s bad for me now as I’ve gotten older- but even when I first bought this in ’96 I was struck by the reading difficulty in some sections. Still, none of that’s a gamebreaker and more often than not, the design serves and enhances the material.

This is a hard book to review- usually I like to walk through and give readers a sense of the different sections, what they offer and how well they work. In this case, the book’s one continuous section. What you have is something more like the core book than anything else. There’s a strong and continuing story- the tale of Tom Olam’s journey through America. Then complimenting that are pullouts talking about ideas mentioned in the story. For example, they travel across the Atlantic, so we get a page on the details of that travel. They run into some "Buffalo Soldiers" and we get a page on Black America. The two parts hold together in the book- with the game and background details deepening our understanding of the story and offering useful and playable game material. I’ve read other game books where these kinds of interruptions and commentaries have thrown me out of the story. I rarely got that feeling here.

THE STORY
Like many classic period adventures, SG&S begins with a dead body. In this case, the body of an Indian sent by the Twenty Nations to arrange a meeting with representatives of the Second Compact. Many- Prussians, Tycoons, and the American government would oppose a link between those two groups. So Tom Olam and his allies will conduct a form of "gunboat diplomacy," flying the flagship of their forces on a tour of North America. The journey, as you can imagine, is fraught with peril. But it combines a look at the best and worst of America along the way. The story’s told, as with core book, from Tom Olam’s perspective. He’s perhaps a less interesting narrator this time out. Tom’s become more a competent agent than an outsider bringing new ideas. Still he does turn his knowledge of our world to bear in logical places and manages to come up with a few interesting tricks. The old characters return, and if you liked them before, you’ll enjoy them here. There’s another shout out to Wild, Wild West in this book- as well as a few other classics. The story takes us from important place to important place, moving from dramatic incident to incident. The story fits together, is compelling and has a strong beginning, middle and end. That’s vastly superior to much game fiction. While it does at times steer off into indulgences, for the most part it does what game fiction ought to do- provide the reader a better sense of life in that setting. Game fiction should entertain but also serve as an entryway into the world for players and GMs.

THE BACKGROUND
From small sidebar digressions to longer multi-page history, SG&S supplies a ton of setting material. Most of this is presented objectively, but some comes from Tom Olam’s perspective. That’s especially true where the book deals with more sensitive issues like race and the treatment of American Indians. One of the high points of this is an excellent two-page map breaking down the many territories and nations of North America in the New Europa setting. There’s an overview of Canada and then the narrative heads south. The actual United States covers New England, the Midwest and the South- up to the Republic of Texas and the Free State of Orleans. The book checks in at the major coastal cities of Washington and New York, spending time examining the powers-that-be and social scene of both. More general material covers the railroads; women in America; the Secret Service; legends and lore; and the Armed Forces among other topics. One of the more interesting sections here covers how the American Civil War actually occurred in this world.

After that, the book lights out for the territories- covering the many and varied places in North America outside of the United States. Each gets an overview, discussion of key characters and materials related to the location. For example, as you might guess, the Free State of Orleans garners a section on Voudon. The Lone Star Republic has an extensive write up- along with all of the classic material for a cowboy game (gunfighting, cattle drives, etc). While the Book of Sigils touched a little bit on Indian Magic, SG&S expands that treatment offering a wider look at that society. There’s discussion of how they interact with the outside world- including what life is like for Indians living in other places. The Mormon settlements get treated- albeit at a distance, before jumping into the life of frontier and mining towns. The book finishes up, as you’d expect in the Bear Flag Empire, the California of Emperor Norton. Again, BoS dealt a little with that, but SG&S greatly expands on that.

THE MECHANICAL STUFF
The book does offer some mechanical ideas for Castle Falkenstein players, but there's less here than in other supplements. A few new dramatic character archetypes appear (Sailor, Industrialist, Solider, etc). Major NPCs and mystic creatures get written up, though with a system as light as this, that feels a little unnecessary. A couple of pages offer new weapons, gadgets and machines. I like the addition of Gunslinging and Renown as abilities, and the most significant news rules are for gunfights and showdowns. With this material alone, you could put together a fairly nice four-color western campaign. On the magic side we get a new approach, with mechanics for spellslingers who use enchanted guns. There’s also some magick presented for Indians; that generally works with the material given in Book of Sigils. As a whole, the focus of SG&S isn’t on 'rules.' It makes up only a small percentage of the book, around ten percent. But everything offered is useful and interesting.

OVERALL
This isn't an essential book for Castle Falkenstein, but it is tremendously fun to read. There’s a lot of background here- and if a GM wanted to include North America in their campaign, this would be a must-buy. Anyone who enjoyed the setting and stories presented in the core book will probably enjoy this as well. Even with the high page count, this book is dense. It could easily have been reformatted to be 25% longer. There’s a ton of material here- both for players and gamemasters. I'm glad I bought it.

PORTABILITY
As with most of Castle Falkenstein, the ideas and material could be ported over to another system. It doesn’t offer any new mechanics which would be hard to translate. The other question of portability is how much this material would be useful for a non-Castle Falkenstein campaign. On the one hand, as I mentioned above, I could imagine doing a four-color magic or non-magic western game using some of these elements. But a good deal of what’s presented here is firmly embedded in the New Europa setting (though not European). Some of these things could be borrowed for other American or Wild West games of the late 19th century- the authors offer a lot and I mean a lot of historical detail. But it would require some filtering to take out the fully Falkenstein-y bits.
Posted by Lowell Francis at 10:25 AM