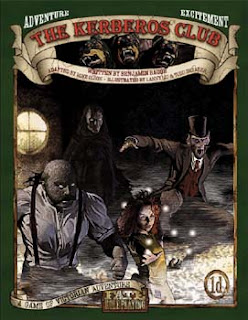 TO THE REVIEW
I have a review of Kerberos Club: Fate Edition up over at DieHard Gamefan. I'm liking Fate more and more as I read the different treatments of the system. The Kerberos Club I first encountered when I bought a ding & dent copy of the Wild Talents version. I liked it, but only skimmed it. When I got the Fate version, on the other hand, I read it from cover to cover. It's a compelling setting combined with a neat set of mechanics. I love that we're in an era of electronic publishing where we're seeing more games done in multiple systems- in completely different books. I was never fond of jamming two systems together in one book (for example most of L5R 2e putting together d20 and classic rules in one book). So I'm pleased to see things like this, Adventures into Darkness and Day After Ragnarok. Kerberos doesn't just change up the NPC stats between editions. Both versions I've read offer alternate mechanics and ideas to make the system better emulate the setting (collateral damage, skill building and conviction aspects in this version for example). .

Kerberos Club also does a couple of things I think every good rpg sourcebook ought to do. First, it provides strong insight and advice about what campaigns in that world look like. What are the stakes? What could players be striving for? How do you give the PCs a structure to work from? But in addition to that, because of the sweep of history, Kerberos offers several different distinct campaign frames and types, depending on what era you settle on.

THE QUESTION OF WOMEN
As I mention in the review, Kerberos Club doesn't shy away from the issue of gender, race and class disparities in the setting. Class is a fixation that helps determines a person's place in the world. Other games take a different tact. Castle Falkenstein embraces the "romantic" view of the period. Class exists as color. Gender roles can be broken out of, but only through panache. CF still talks about female character swooning. That might seem amuzing, but at the table I bet that would get old for some players quickly. Though I wouldn't call steampunk an aesthetic with any political connotations, some connect it with an egalitarian ethos. For those the gender issues don't exist- at least for PCs. Kerberos Club's more honest about the period and the difficulties women face. And they aren't small. Women characters face enormous difficulties- one's that can't easily be overcome. And barging through one set of these obstacles doesn't free the character up- those will always be there.

And as my wife said, that's not a particular rewarding or attractive prospect at the table. It is a structural disadvantage of the period. And I'm not sure how one gets around that, except to white-wash and file the edges off. Because given the variety of possible game universes to, the one where your gender is a massive unrewarded disadvantage is likely not to get your vote. That's knock intended as a slight against Kerberos Club or Victorian-era gaming in general. But it is something to consider- especially if you hope for an inclusive game and a diverse table.

Beyond the difficulty of making a historical game attractive to players, alternate histories have a couple of other hurdles to overcome. Obviously they need to have a degree of verisimilitude. They need to look a like the period, or at least the idea of the period in people's minds. A game that tried to right the wrongs of people's imaginings of a time would be a hard sell. Even the most nuanced historical rpg sourcebook has to make allowances to play. History rpgs have to combine look and feel. I recommend looking at the evolution of Ars Magica as an example of slow and careful development towards a "realistic" and playable version of history. The earliest editions, first and second, have a lot more fantasy feel to them. The art looks anime in many places and some of the later excised story and background elements suggest a much more high fantasy approach than the later solid and even staid approaches to the society of magic.

Alternate histories also have to been consistent or at least make sense. I still think anyone wanting to do something with alternate history owes it to themselves to read Howard Waldrop (for fiction) and Ken Hite (for rpg concepts). Some alternate history books get things really right. Last year I reviewed as many of the Roman-based rpgs as possible. Some, like Cthulhu Invictus, added elements but didn't create another timeline. Fvlminata, on the other hand, posited a basic change, the early discovery of gunpowder and built a solid and consistent world on that concept. It made sense from the initial premises. On the other hand, Roma Imperious seemed to take a kitchen scene approach, which felt inconsistent. It felt like a Roman setting retooled through the lens of old school D&D; to be fair that may have been part of the intent. For the Victorian era, Kerberos manages to keep things together. Like Castle Falkenstein it juggles many different elements which could easily end up feeling like a crazy mish-mash. I enjoy those games that work with the Victorian period as is, rather than moving the timeline forward and suggesting that Neo-Victorian fashions and tropes somehow remain the same. Consider Etherscope and Unhallowed Metropolis, the first of which is set in the year 1984 and the second in 2100. I understand the desire to have those trappings, but I think in both cases, the same settings could have been built with a more less insane timeline.

That timeline also has to be open for the players. Kerberos Club takes the risky step of providing a detailed history that runs from the beginning to the end. I say risky because more than once I've read game histories that remind me of bad film trailers- "OK, I've seen the movie now...don't need to go to the theater." In the case of rpg settings, it feels like the interesting stuff has already been done. It also seems that the results have been absolutely written. Obviously that isn't the case- but game material works better when it invites readers to imagine a place for themselves in that. Kerberos manages that because in part it stays fairly generic when talking about the activities of the Club itself. With a few exceptions (such as dealing with the Jack-the-Ripper murders) it avoids mentioning which Kerberans dealt with which problems. I don't get the sense, as I have in other books, that another party of PCs has already played through and set the tone. You see very few "Mary-Sue" former PCs in this book. Where the book does define events heavily, it presents them with enough room that a GM could easily construct an adventure using that material- and one that actually matters. There's room behind the scenes for the players to make a difference, even at the tragic end of the Club itself.

SUGGESTED READING
The Kerberos Club's especially notable for running from the beginning of the 19th Century on. Most Victorian games are planted firmly in the later part of that period- either specifically by the date established or more generally by the tone. The early part of the century presents a host of challenges and details usually not dealt with in pop culture- post-Napoleonic fallout, Regency and Edwardian England. Obviously some recent fantasy fiction (Jonathan Strange and Mr. Norrell; Naomi Novik's Temeraire series) do cover that period.

The bibliography at the beginning of the book is pretty light. I'd recommend the following books and sources not mentioned there:

The Making of Victorian Values: Decency and Dissent in Britain: 1789-1837 by Ben Wilson. Far and away the best insight into the period before Victoria took control of the hearts and minds of her nation. Does an excellent job of how we arrived at the classic and unbending picture we have of the times.

The Birth of the Modern by Paul Johnson. One of the most readable histories of the early 19th Century. Dense and full of interesting ideas.

GURPS Steam-tech: I like the GURPS Steampunk book, but as a sourcebook for high strange and ideas for mad science to throw into a game like this, you can't beat this volume. The bits and pieces here can be dropped independently into many different Kerberos campaigns.

Pyramid Issue 23- "An Assignation With Her Exaltedness" an article providing inspiration on how to combine the paranoid world of Over the Edge's Al Amarja with steampunk. Would definitely fit in any Kerberos campaign and make for a great foreign destination.

Whitechapel Gods: An example of how not to do Steampunk. Ugh. Basks in the trappings and clearly wants to be part of the scene but goes overboard.

Kim Newman's Anno Dracula and Mark Frost's The List of Seven. The former's a pretty rolicking fun ride which presents a take on the supernatural out in the open in Victorian England. The latters just weird and all over the place but might offer some inspiration for certain kinds of horror games. I'd also suggest Dan Simmon's Drood for pure atmosphere and uncertain narration. Lastly Steve Brust & Emma Bull's Freedom & Necessity takes place in mid-century England and combines the philosophical with the fantastic.
Posted by Lowell Francis at 2:59 PM