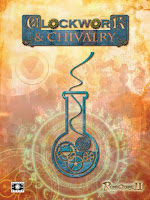 YOUR REVIEW IS IN ANOTHER CASTLE
I wrote a review of Clockwork & Chivalry rpg which appears on the Die Hard GameFAN today. C&C's role-playing game covering the English Civil War, but with magic and gadgetry. I’m in kind of a strange position reading this game. On the one hand, I’m American so the ECW’s not at all part of my background- in history class or in local lore. I wasn’t raised with the nuts & bolts of geography, society and culture of England. On the other hand, I’m a history buff. I’ve read a chunk about Early Modern Europe, I like other historical games (Cthulhu Invictus, Ars Magica), and I’m watched a number of documentaries about the full span of Great Britain’s evolution. Before I went to read Clockwork & Chivalry I made some notes for myself, in part because I want to consider some things about expectations in gaming products.

EXPECTATIONS
Beforehand, I knew it used Mongoose's Runequest II rules, which of course is about to get de-licensed and changed into something else. My impression was that RQ II was just a variant on Basic Role-Play, a system I do know. Reading through I got the sense that RQII added some significant details- including mechanics for communities. I knew C&C was the main book covering the setting, a historical fantasy rpg which includes both Clockpunk elements as well as magic. It used English Civil War period as its background- Royalists against Roundheads. I assumed that the game would have that as a fairly distant background, focusing on the fantastic- strange magic and wondrous devices. Maybe there’d be an oblique Hogwarts reference.

DOOMED TO REPEAT
Historical rpgs are tough...or at least they’re a tough sell around here. I have a couple of grail rpg campaigns I'd like to do: Mage: the Sorcerers' Crusade and Rome as the two biggies. To get players to buy games like that I'd have to make major changes to emphasize the genre elements over historical accuracy-- including the genre elements aligned to the history (such as the Steampunk in Castle Falkenstein). So my expectations were that Clockwork & Chivlary would do likewise. But actually the opposite.

This is a historical setting rpg that adds in other elements for flavor. The situation of the wars- the politics, the disruption to communities, the religious strife, the factionalism...all of those things come first before we get to any of the fantasy elements. This is a pretty serious treatment of the period, with those concepts helping to create this alternate history. The authors present an amazingly thorough overview of the period- and most importantly, offer playable material. I’m not saying it will be easy to acclimate players but the books presents rich discussion of the various character options. Where they do reduce the complexity, they do it in a good way. I never felt like anything seemed too out of place- but again, my knowledge of the period is mostly based on some recent reading.

READING IS FUNDAMENTAL
Not all that long ago most of my knowledge of the period lay in military history, and mostly about some organizational changes rather than specifics. Most of the military history books avoided anything about the matters behind the battles. I knew Oliver Cromwell as a Puritan who was good or bad-- I'm never sure. The most specific knowledge I had of the topic came from reading Dumas' Twenty Years After in which the Musketeers attempt to rescue Charles I from his execution, not the most accurate source. I’d played some ECW miniatures games, but not with any sense of the stakes. Since my closest analogue was the American Civil War, I assumed you had a central issue- like Royal Power as the key issue people were fighting over.

I think what struck me the most when I actually started reading was the complexity and the assumptions. I'd actually started a book called The World Turned Upside Down: Radical Ideas During the English Revolution by Christopher Hill. But I couldn’t get very far in it- completely lost in the references. I ordered Hill’s book two years ago when I saw it mentioned in connection with revolutionary thinking-- material I thought could be incorporated into a game. When I actually tried to read it, I found it assumed so much previous knowledge I couldn't make it through. I'm a pretty involved reader and usually I can work through by context, making notes and using the great leveller of Wikipedia. However here too much came slinging at my head at once.

Cut forward to a few months back and a trip to the bookstore yielding a copy of God's Fury, England's Fire: A New History of the English Civil Wars by Michael Braddick. (Digression: how is this a mass-market paperback? This isn't the most readable volume; it's remarkably dense and yet Penguin had enough faith to push it...wouldn't have been my guess when I was in academic publishing...). In any case, God's Fury... ended up being an excellent resource. It focused on the social, economic, religious and political dimensions of the conflict. Battles and skirmishes ended up dealt with only as they had a significant impact on the course of things. What I picked up from that book, which I have to say was still a pretty heavy volume of serious history clocking in at 600 pages, allowed me to return to the Hill volume and work through that.

That being said, I still found myself hitting things in Braddick's book that confused me. I gradually began to realize that these were issues, ideas and moments that your average native Englander would have pretty securely in their belt. I consider myself a pretty well-read history buff, but quite a bit of it took me some time to resolve or sent me scurrying to check on things not ever defined but simply assumed (like Lolladry, Mechanic preachers). I think that actually gave me a better sense of the importance of this period for English history-- so much taken for granted about the period and ideas as baseline knowledge. I imagine that's probably the same for the American Civil War...but I may be over or under estimating the state of history teaching.

Clockwork & Chivalry has all of those complex issues and factions in the book. I’m glad I read some secondary sources before I went to read that. And the authors don’t just stick with the details and add some fantasy elements. They’ve created a rich and plausible alternate reality. I was more than a little shocked that the King gets executed so cavalierly in their history. In the real world that process dragged out with many reverses. But they have a logic for doing that, and it sets the stage for the game world that follows. This isn’t a military rpg, but more of a game in which the players must navigate a dangerous wasteland- almost a social post-apocalyptic game, in my reading.