RPGS That Scare: The Book of Unremitting Horror (Gumshoe) 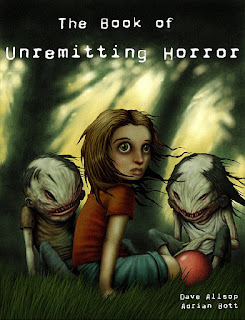 WHAT IS IT?
Book of modern monsters and horror for use in GUMSHOE system games such as Fear Itself and The Esoterrorists.

TO BEGIN
Allow me to establish a fact before digging into this review.

I like the horror genre. I like a good horror film- I like the dread of them. I've watched all kinds and except for more recent torture porn movies- have usually found something interesting in them. I started reading Clive Barker through imported British editions. I did my senior college project on consumerism, morality plays and tropes in slasher films. And I've run a lot of horror games. I have people who will attest to my skill with that. I consider myself well-read and have seen many different games try to model horror. I've read all the "Black Dog" mature audience crap White Wolf put out, trying to push the envelope of gore and terror.

All that being said, this book creeps the living **** out of me.

I just want to get that out there.

THE BOOK ITSELF
The Book of Unremitting Horror: Gumshoe Edition (BoUH:GE) comes in at a solid 222 pages, softcover. The cover is awful. In fact, the image I've posted here isn't for this edition. That's the less disturbing cover for the shorter d20 edition. The cover on my version you can see here. Did you go and look at that well-drawn but awful thing? I turn the book over face down when I have it laying around. The d20 cover is creepy...this one's well, jeez- let's just say I wouldn't take this out for "Read an RPG Book in Public Day." That cover's done by Dave Allsop, who also provided the lion's share of the interior black and white art and cow-wrote the book. Adrian Bott's the other writer, and he handled the adaptation of the original material to the Gumshoe system. An early Pelgrane book, it shows the excellence in layout and book design that company's come to be known for. Once again, the amazing Jérome Huguenin, turns in a page design simultaneously interesting and useful. The page edge effects and typography are dynamite. This is a thick book and the only criticism I have of it as an object would be that the lamination on the cover pretty quickly curled at the corner.

The colors used on the front cover offer an evocative mix of grey-green and red. I could talk about that all day. But at some point I have to open the book up again don't I? I have to review this...I'm putting that off.

TURN OF AN AWFUL PAGE
OK, let's start simply, with a statement of what the book offers. It contains details on 40+ modern horror 'monsters,' fifteen magical artifacts, ten scenario seeds, and two fully fleshed out developed Gumshoe scenarios. It is useful.

I'm going to try to avoid spoilers- so as not to ruin the surprise and also because I don't want to think about these things too hard. Each creature provide here has a short piece of fiction to introduce it: a story, a report, ramblings of a madman, a witness statement. I'm not one for game fiction usually, but some of these worked for me- hitting me solidly and giving me unpleasant ideas about how I might cut open and jam these into a campaign. After that the book provides modest game stats; the rules lightness of Gumshoe means that you don't need much. Most of the space is devoted to the nature of behavior and special abilities of the various creatures. The book does a good job of offering what's need to actually play out these powers- without worrying about exhaustive discussion. A discussion of the monster's origins, its purposes and intelligence rounds that out. The most useful section for the Gumshoe GM will be discussion of the kinds of clues and evidence left behind by these creatures. Those details make constructing scenarios for them significantly easier.

But what are they like? They're modern horrors. Some of them take classic old stories and twist them in a new way (Clootie, The Drowner), some of them have a Barker-ian or Candyman-like feel to them (Kooks, The Organ Grinder), and some of them are just freaking awful and nightmarish (Dementia Larva, The Blood Corpse, The Blossomer). In particular that last one...guh. These are nasty, brutish and above all visceral monsters. They're also really adults only- some of the stuff is pretty hardcore. It isn't torture porn, but it does echo splatterpunk-style horror, the best of the Hellblazer material, and ideas of writers like Joe Lansdale, Ramsay Campbell, and Kim Newman. It isn't subtle, but it is insidious.

Including an introduction that offers some additions minor Gumshoe mechanics (such as how to handle drowning), the monsters section takes up 134 pages of the book. The next fifteen pages present artifacts drawn from this nightmare world. These are fairly rule-agnostic and several of them tie into specific creatures from the first part. After that, the authors consider how the cosmology of Unremitting Horror and The Esoterrorists actually fit together. That's an interesting section- and one that does an excellent job of laying out the theories behind each settings monstrous entities. Depending on how strictly a GM adheres to the logic of either, they will find this more or less useful.

Next the book presents ten scenario outlines using the Unremitting Horror beasties. Each plot in this fourteen page section is given a useful breakdown: sinister conspiracy; investigating scene; core information; supplementary information; antagonist reactions; climax; and aftermath/veil-out. Some of these are quite good and any of them could make for an evening or two of really gruesome investigation. Finally the book concludes with two extended adventures using the book's ideas. The first offers an easily portable rural setting, and the second an urban adventure for London, but which could also be moved elsewhere. Both offer nice twists and investigative opportunities. In particular, the second adventure, "The Final Case" has great atmosphere, especially one of the free-floating clues. It does have more magical overtones, which may not fit as well with some versions of The Esoterrorists or Fear Itself universes.

OVERALL
I'm picky about my horror- some I just don't like and some actively repulses me, like the current strain of torture-porn horror. On the other hand, many of the old classics have been worn out into sad pale imitations or reduced to jump scare moments. Horror which genuinely bothers or gets under one's skin is harder than ever. The Book of Unremitting Horror manages to hit on many of the things which bother, disturb and scare me. I'm kind of its ideal audience in that it pushes all of my buttons. On top of that it is well written and full of interesting detail. It is dark and awful- GMs should consider their group and game before dropping things from this book into play. Used sparingly, they can really darken a game. If you're running modern Gumshoe horror, you should pick this up.

PORTABILITY
While there's a d20 version of this, the Gumshoe version does offer a focus on investigation- framing the monsters in that way. I think that makes this more useful. The mechanics here are fairly light. All of the creatures here could very easily moved over to another game system. If you're doing dark modern horror, like Unknown Armies or Delta Green, consider picking this up.

OK, I'm done now. I can go put this book back up on the shelf and not look at it again until I run this kind of game. I'm serious when I say this cover really gets to me. I have it sitting beside me with the monster's red eyes staring at me as I'm typing this review up on my laptop.

OK, I flipped it over face-down now.
Posted by Lowell Francis at 9:10 AM