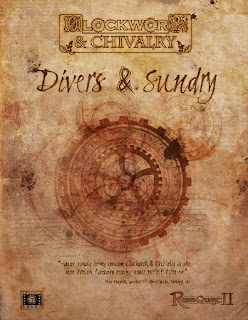 OVERVIEW AND THE DELIGHTS OF A SETTING
I have a review up of Divers & Sundry up over at Diehard GameFAN. The book’s a collection of miscellaneous stuff- character options, background, history, and adventures for Clockwork and Chivalry clocking in at 180 pages. While interesting, it jumbles together GM and player material in one book. It’s definitely a book for gamers really into the C&C setting.

Divers & Sundry got me thinking about historical games and trying to nail down what I find interesting about some settings. I like playing in my own worlds generally- it gives me more room, plus I feel like I’ve actually created something I could use in the future. Where I do run from established settings (Changeling the Lost, for example) I tend to spin pretty far away from the given material. In our group, few people buy gaming books for the games themselves. Some they’ll buy to read and some because they want to core system. But we have few players who "know" a setting like Forgotten Realms or the new World of Darkness, for example. Where a GM does use an established background, this gives them greater opportunity to present things as new and novel, to translate the experience of the setting to the players. But it does also mean that the GM can’t assume knowledge on the players’ part.

DEVIL IN THE DETAILS
But let me come at Clockwork & Chivalry, and its fantastical English Civil War background. I’ve read through the core book and Divers & Sundry, but not the adventures series. I’ve done some reading on the English Civil War itself, so what’s grabbing me here.

All that being said- I would have serious difficulty in running C&C for my group. My knowledge of the period is light, and most of my players are about the same or less. We’re not a group where everyone buys and reads the books, so I can’t expect them to do that with this setting. Given that, how can I borrow those concepts for something else.

TEARING DOWN
My thought is to strip out the historical context and focus on the structural elements I like from Clockwork & Chivalry. The idea would be to create a more conventional fantasy setting, with some of these elements at play. We’d begin with a kingdom, divided by a recent civil war, with the struggle arising out of a King attempting to maintain/gain power; a new set of Gods rising in worship; a peasantry trying to restore old rights; and an attempt by the nobles/merchant class to gain a greater share of power. I’d translate most of the religious issues over into a simple polytheistic form, with different religious forms and beliefs represented by distinct gods. There would be a history of turmoil among the gods, but nothing as severe as this. The beheading of the King at "The Great Battle" has serious magical and real world repercussions. In killing the King, they also ritually managed to kill the god which the king represented, the All-Father of the pantheon. The worlds of men and gods have been turned upside down.

MAGIC AND MILIEU
I’d keep most of the fantastic elements as is: alchemists who can do magic as a crafting art. Such talents would be rare and generally part of the upper classes. There would be a crafting or academy tradition to this. On the other side would be the more ‘proletarian’ masters of the Clockwork arts. I’d want to expand those possibilities, perhaps looking at the Castle Falkenstein material or GURPS Steamtech for ideas. Monsters and magical creatures would exist- but would be legendary and unique.

The tech level and setting would be a loose analogue for the ECW setting- Early Modern Period, with black powder weapons, but still a greater emphasis on cold steel. I’d emphasize the Three Musketeers stuff for visuals. That means I might be able to lift from sources such as GURPS Swashbucklers, 7th Sea, and Lace & Steel. I’d keep the grit of the original setting, though. It shouldn’t be too flashy. In some ways, this ought to feel a little like a strange post divine apocalypse setting. The old ways- of kings, of gods, of society, have been overturned. On possible way to get additional player buy in would be to present the players with a rough outline of these details, and then have them actually build the timeline using Microscope. The history could begin with either the founding of the Empire or with the initial schism and end with the death of the King.

I’d take the various factions of the Clockwork & Chivalry setting and rework them to fit with the details. I’d want these to be pretty simple, a few key keys and goals, a set of standards for righteousness, and a map of relations to other factions. I’d also want to have a description of the 'hard' and 'soft' version of those philosophies- with the idea that PCs always fall on the softer side. I want the players to have constructive conflict, about figuring out ways to work together despite their differences. Key to this would be building a collective community at the start of the campaign. John Wick’s Blood & Honor starts with the players constructing a clan together. I’d do the same thing, with the players building a town or village they come from or live in. That would represent a set of resources for the players, but also something all of them want to protect. Following up on the idea of this being a kind of fantastic post-apocalypse world, you could borrow something from Greg Christopher’s Cascade Failure, with the players representing the first group of tradespersons heading out after the big mess has happened. That would require that the factions had been fully established before the event. But that’s an interesting frame. The most important idea here would be to offer neat play choices at the table, without establishing ‘absolute’ bad guys. The morality and choices on the table here should be much more grey.

OTHER APPROACHES
A couple of other non-literal approaches to this setting suggest themselves. I’ve mentioned before the idea of historical Hogwarts. That might be a way to get players to buy into history- if you suggest that this period has the founding of Hogwarts, as a response to the chaos of the period. It shifts the game away from the ECW issues, but allows the GM to play with those as an interesting and rich backdrop. Another game approach to this, using the setting as is or in the fantastic form I mentioned above, would be to use Dogs in the Vineyard. DitV focuses on communities and issues of philosophy and faith. You could easily rewrite DitV as for this setting. A GM might do a session of this to give players a feel for the setting.

LAST WORD
Worth it? Not sure. It is an interesting exercise. I do want to put together a fantasy campaign that has a community-based focus. I'm not sure it making the radical changes I'm suggesting here add too much. Would it be throwing out the baby with the bathwater? At the very least it is an interesting thought exercise.
Posted by Lowell Francis at 3:11 PM