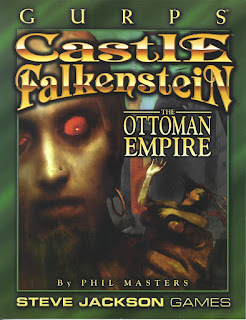 WHAT IS IT?
The sourcebook for the Ottoman Empire in the New Europa setting, offering both GURPS and Castle Falkenstein mechanics.

THE BOOK ITSELF
In many ways, CF: tOE has a hard legacy to live up to. R. Talsorian had established an excellent house style and despite some strangeness at times, produced good looking and useful text designs. This book sticks with the usual late GURPS 3e style- two columns with an occasional break-out quote to keep the text from looking too dense. It does use some distracting screens and watermarks on a few pages, but those are relatively rare. The cover’s a little ugly- and takes a bit to resolve. With a setting as evocative as this, they could have gone a number of directions, but this ends up being messy and generic. The interior art’s by Paul Daly- with a few public domain images thrown in. It is nice to have a single artist working throughout, though Daly’s stuff looks more than a little messy to me. It certainly doesn’t measure up to the other CF art (though it is better than that of Memoirs). As a collector of GURPS books, I’m a little disappointed that I lost the print-edition roulette with this version. Some GURPS books have excellent solid spines and softer covers- and then there are ones like the copy I got. The card cover’s solid and stiff and the spine on the book cracked and split almost immediately. I have to be careful to keep the pages from tumbling out. If you’ve collected GURPS 3e books, then you probably have seen this-I used to have multiple copies of the same book- one with pages dropping out and the other fine. In any case, buyer beware.

CF: The Ottoman Empire follows the lead of The Book of Sigils and Six-Guns & Sorcery, offering a travelogue adventure story combined with mechanics as it moves along. CF: tOE’s written by Phil Masters who also worked on GURPS Castle Falkenstein, Arabian Nights, and many others. The story follows the travels of Eberhardt Starkmann, a new character. He’s recruited by Tom Olam and the leadership of the Second Compact to act as a spy while touring the Ottoman Empire as a survey engineer. Starkmann’s not a character who grabs attention or really adds anything to the story. He’s a hero, but he doesn’t have the flavor or intriguing contradictions of Tom Olam or Anthony Savile. That works to some advantage in that he doesn’t get too much in the way of presenting the background and setting.

I appreciate how the Castle Falkenstein books use Tom Olam, a modern character, to comment on the problematic attitudes and approaches of the Victorian Era. The New Europa setting does Victoriana with most of the rough edges filed down, but some things still grate (such as the treatment of the underclass and Jews in Europe; the treatment of blacks in America). CF: tOE has to deal with the question of Orientalism; especially since this, through the work of Burton and others, was the heyday of that colonialist and dismissive approach. I think Masters strikes a decent balance. He acknowledges the problem through Olam’s voice, but he doesn’t dwell on it. The Muslim world presented here is a fantasy- a magical setting which combines the mixed drive to modernity of the Ottomans with the residual folklore and superstitions of the "Arabian Nights" genre.

STORY AND BACKGROUND
Travel, magic, mystery, romance, double-crossing, Russian Spies...Starkmann’s story crosses the Empire and takes in a massive chunk of the geography. In past CF books, I’ve been able to breeze through the material, enjoying the story and background and finishing in a single sitting. It took me many starts and stops to get through the narrative here. I suspects the combination of layout and less compelling narrative kept me away. It may also be that the earlier sourcebooks set a high standard. The story compliments the background material, rather than acting as an equal partner.

That background opens with a discussion of the place of the Empire in history and in the particular strangeness of the Castle Falkenstein world. The existence of magic has an impact on the history of new Europa but doesn’t overwhelm it; the world presented is still recognizably like our own. Various topics such as travels and on-humans in the Empire get a brief mention. Starkmann’s journey begins in Greece and moves quickly on to Turkey and then the Levant. Tom Olam’s voice breaks in from time to time to offer additional outside comments and perspective. It moves through to Baghdad, having toured the most civilized portions of the Ottoman Empire. The book only stops off for a few sidebar topics- in this case Women Adventurers in the Middle east- unlike previous CF volumes.

The tour moves into the wilder lands of Arabia at that point. We get discussions of the Hajj, Bedouins, the Wahabbis, Ghuls, and the introduction of the Djinn. The book then breaks off into a chapter discussing Arabian Magick and mystical orders. After that break, the story returns and heads back to the capital at Istanbul. And the story wraps up. Then you have another 18 pages on the Djinn and Arabian magical tomes and lore. With the exception of magic, most material gets treated lightly in passing. The rush of the journey matches the rush of the material. Given how well something like Six-Guns & Sorcery managed to cover a huge landscape, CF: tOE disappoints. It offers enough to introduce Middle Eastern NPCs to a campaign or perhaps to stop off for a brief story arc, but not enough to do anything substantive.

THE MECHANICS
If you like NPCs stats, then this book has plenty of those. And I’ll admit my frustration with this book comes in part from having to break off into those write ups every few pages. Classic CF requires only a few lines to detail NPCs- leaving more room for playable material and ideas. The book offers some new character options- how old abilities work in this part of the world and two new abilities: The Ottoman Way & Trader. A number of new character archetypes appear (Expatriate, Noble Ottoman Adventurer, Expatriate, Local Spy, Ottoman Dwarf, etc). Most of the mechanics presented cover Magick in various forms. Fully thirty-six pages of the 128 page book deal with that. That sticks fairly closely to the flavor of the Arabian Nights. Perhaps the most interesting and general useful material covers the creation of "evil" or problematic items in the setting.

OVERALL
There’s a lot of potential here- and some interesting things for a GM to use. However, that’s going to take some work. CF: tOE doesn’t offer the depth or smooth approach of earlier Castle Falkenstein books. I’m glad it exists- having additional material on a part of the world not treated before is great. I’d have loved to see more books like this, perhaps covering India, China or Japan, all interesting during this time and all hinted at before. Even something like a purely British sourcebook would be welcome. However I suspect those days will not come. It’s been almost ten years since CF: tOE came out and GURPS has moved on to another edition. Castle Falkenstein itself is apparently still in print, though many of the links on the R Talsorian website make it hard to judge what condition the company’s in.

PORTABILITY
The mechanical material requiring conversion is pretty exclusive restricted to the sections on magic. If you’ve converted CF to another system, the difficulty will be based on the magic’s crunch. It is interesting to see another approach to conversion- looking at how GURPS magic has to bend and crack to capture the feel of CF magic. If you’re looking for a general sourcebook on the Middle East for another Victorian game, this might be useful, but the mix of narrative and the focus on the New Europa setting makes it weaker in that regard. If you’re looking for more general Arabian Nights material for other games, I’d look at GURPS Arabian Nights over this volume.
Posted by Lowell Francis at 8:40 AM