Hulks for Gulags & Confessions of a Bad Gamer

FORMATIVE GAMES
From time to time I like to use other people’s RPG Geeklists as a jumping off point. This week I came across skalchemist’s list Interesting ideas from the first 15 years of roleplaying (1974 to 1989). That got me thinking about all of the games I read during that period. But before I get to that, I want to point at a pretty specific idea he mentions.

A VERY BRITISH COUP
In talking about the strange Red Dawn-emulating game The Year of the Phoenix, he makes this comment,

"On the other hand, it could be fun to do a game set in alternate history where communism won, but from the perspective that this wasn't the advent of Orwellian dystopia. For example, proletarian superheroes, or a version of the Gumshoe system set in an alternate United Kingdom under communist rule where investigators have to toe the line between solving crimes and pleasing the commisars."

Yes- we need someone to write this up right now. I love the idea of this campaign frame for Gumshoe. We should be seeing Ken Hite’s take on spies for that system soon (Night’s Black Agents) which might offer some mechanisms. But I’m imagining a game that’s a little noir, a little 1984 and a little bit Tinker, Tailor, Solider, Spy. There’s that whole 1950’s-1960’s era which has the heyday of east End Gangsters, plus the Kim Philby affair. Though I didn’t like the book as a whole, you could easily lift some of the ideas from Alan Moore’s League of Extraordinary Gentlemen: The Black Dossier. And China Mieville’s recent work might be useful. Imagine Gorky Park in a communist Britain.

I love the idea of a game where the players have to contend with their place in the party hierarchy. Perhaps certain kinds of investigations, moves or requests would have a status cost or a status test. Players could carefully maneuver against one another- with the idea of gaining in the long run. I’d have a counter-balancing mechanism that players don’t want any one of their team to be "purged"- such an event would reflect negatively on them and might cause a chain reaction. They would just want to carefully leverage their position against one another. I haven’t read Wilderness of Mirrors, but that might be something to look at for inspiration as well. Imagine a cross between Gumshoe, 1984, British Noir and Paranoia...

THE WONDER YEARS
Back in college, I had the chance to play a few sessions of a Rolemaster campaign with a guy we’ll simply call Skip. He’d been among the older generation of gamers when I was growing up- not the real adults but in between them and my sister’s group (five years older than me). Skip had been a fixture around the gamestore and had played and run with a lot of different people. He was running his campaign using RM Classic, but set in the Mystara from TSR. We played for a while and while it was fun, Skip came off a little condescending to me. At some point, while not trying to be confrontational, I pointed out to Skip that I’d been playing RPGs for since ’75, almost fifteen years, and almost as long as he had. He pointed out that while that was true- most of that time I hadn’t been an adult or even close to it.

Of course, the stupid thing is that he’s right. It stuck with me because in those early years I "played" rpgs, but only in the loosest sense. I had little grip on the rules, I spent more time just making up characters than anything else, and more often than not I didn’t get the point of the game. Skalchemist’s list got me to thinking about those early games- what I got out of them and what I completely fumbled.

SUPERS
The first superhero game I got was Superhero 2044. I made up a bunch of characters for it, I know we played it, I even bought the one supplement which came out for it from Judges Guild. But I couldn’t tell you much about it. I remember it had a cool chart for rolling random patrol events. It wasn’t until many years later that I realized that it really didn’t have much of a system to it. It had stats, with a point buy mechanic, and some other stuff. But I couldn’t tell you how it operated. I know it was a mess- but I don’t think we got very far beyond the stage of "I do this!" and "OK, this happens!" with the game. It got ditched pretty quickly when Villains & Vigilantes came around. It had actual power lists and random character generation. That meant you could keep rolling up crazier and crazier characters. We played a lot of this- the first non-TSR game I played seriously with kids my age.

But I had no idea how the rules actually worked. Literally it was a year into playing before someone showed me how combat operated. The first edition of V&V had a chart cross-referencing attack and defense powers. You took that number, modified it and multiplied it to get a % you had to roll under. I think. As a kid I somehow thought you had to cross-reference and check that with five different defenses to get a total number- meaning I had to do five different look ups and adding of numbers for any attack. Instead, setting a trend for all of my gaming to come, I fudged it- doing it neither the right way nor my stupid imagined wrong way.

And then, of course, in close succession came Champions. That was the game that divided the superhero players in our group- with older, long-running campaigns sticking with V&V and gamers a little younger going over to the new hotness. I loved Champions for one reason. They had blank hero outlines on the character sheets. You could draw in any costume you wanted. I remember xeroxing stacks of copies at the South bend tribune where my mom worked. Those old kinds of copies- with slick paper and be smell of toner fluid. Then I’d try to draw costumes, come up with a name and maybe try to figure out what powers they had. But as for the rest of it...I knew how to buy characteristics, I could buy basic powers but anything more complicated than that lost me for years. I remember the shock two+ years into playing the game when I found out there were different kinds of damage, with different kinds of defenses. It was years before I figured out how the various power frameworks actually functioned.

OTHER SYSTEMS
For most of the classic TSR games, I got a grip on the basics and ran with that. I mishandled magic, saving throws, psionics, experience...just about every system in Dungeons & Dragons from time to time. Top Secret remained a favorite of mine, but I couldn’t tell you how anything beyond the skill rolls worked in that. I bought a ton of Tunnels & Trolls stuff- from the basic set to Monsters! Monsters! to the various solo adventures. But I never played it with anyone, so I never had to actually figure out how the system of dice and adds worked. Instead I’d make up characters and just read through all of the solo adventures- maybe making a roll from time to time. Essentially they were my more sophisticated versions of a CYOA. For any of these games, the most important thing was trying to get to the story. We’d play and I’d handwave away anything more complicated, or more often come up with something on the fly that made little sense in the long run.

As I got older that approach had some consequences. First, I bought a lot of systems and even played many of them without actually really getting how they worked until well into the game. I never built optimized characters because I didn’t have any idea of what optimal meant. Second, I skimmed and ran these games with a ton of errors. For example, we played GURPS for close to two years before I finally figured out how Passive Defense worked. I thought it you rolled it separately from and in addition to Active Defense- instead of adding those values for a single roll. Third, I often found myself out of my depth at conventions when I played with other people who knew the rules in depth. 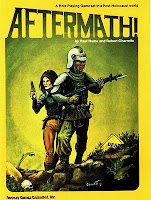 That being said- eventually I got better at that. I learned how to read and approach the rules. And more often than not, I discovered I didn’t care for them. I had a weird transition during my high school gaming days when I tried to read and follow games in depth. Gene Ha recommended the various FGU games- like Aftermath, Space Opera, Daredevils and Bushido. I read those and got lost. But by now I’d played so often with cobbled together and kludged rules, that I realized I didn’t have to go with them. I’d say pretty much from late high school on, I never ran with the rules or system exactly as written- with possible exception being the hard math version of Hero system. For everything else, I made changes to suit what I wanted out of the game. I liked Daredevils, but not the system so I ported it over to GURPS. I liked GURPS but it had a lot of excess detail and crunch, so I peeled away to the most basic elements. I loved all of the strangeness and charts of Rolemaster but jettisoned strange mechanics like their convoluted initiative system and the limits on spell buys.

It’s strange because I look back at that period- from the time I started gaming until just after high school- and I know I bought and read a lot of games. I recall a little bit about everything I mentioned above plus stuff like Fringeworthy, Ghostbusters, Pendragon, Twilight 2000, Paranoia, Mercenaries, Spies & Private Eyes, Psi World, The Mechanodd Invasion, James Bond, DC Heroes, Star Trek RPG, The Fantasy Trip, DragonQuest, Ringworld, Powers and Perils, Stormbringer, MERP, and many more. I recall them all fondly, but more as idea of games rather than as systems.

AND THAT MEANS?
The benefit of this kind of approach- well, I’ve never been afraid to tinker. I’ve always been willing to build the system to support the kind of game I want to run. I’ve also gotten pretty good at handling rules disputes and adjudicating on the fly in play. My players know and trust me (for the most part) on that, so I’m able to maintain a certain transparency.

The drawback to this kind of approach, well I’ve never been afraid to tinker. That means I tend to go into reading rules with a chip on my shoulder. I’m already thinking about how to change things, rather trying to accept the logic of the game and rules as presented. It means I really can’t do playtesting, because that kind of work requires and attention and adherence to the rules. It also means that I’m not the best GM for some kinds of players who really like mastery of the rules and a static system for arbitration.
Posted by Lowell Francis at 6:53 PM