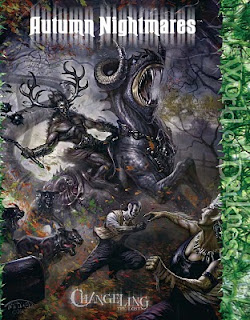 What Is It?
The enemies book for Changeling the Lost.

Ask Me About My Challenge Rating
Continuing my series looking at the books in the Changeling the Lost line, we come to Autumn Nightmares, the antagonist book for the line. For many people, just saying that will decide if this is a book for them or not. Myself, I don't usually buy most antagonist books-- for example I won't generally buy a monster compendium or bestiary for fantasy, horror games, and the like. I actually get irritated when an rpg line I like does a revision and one of the first things to come out is the monster book. But that's curmudgeonly of me. I don't pay attention to stat or mechanics blocks. What I want are interesting ideas about stories or situations for enemies. If a book provides that, or has NPC style adversaries with stories, or perhaps presents enemy organizations with plots, then that's something I'll buy.

So that's the question here: do the antagonists presented actually give me ideas for stories I can tell at the table. That's the only valid criteria I think I can bring to the table since I won't judge the relative balance, challenge level or the like (with a modest exception). So I'll break the book down by the three sections.

Section One "Rivals"
The first section of Autumn Nightmares covers mortal enemies as well as Changeling ones. As with most of the material in the Changeling books, there's a reliance on the Miami Freehold example from the core book as a backdrop. I think that gets in the way sometimes of them presenting more generic or open details. I do like that each section starts with some discussion of the nature of these threats. For example, the first adversarial Changelings are "The Mad." That's an important discussion the because Clarity balances player choices. Since Clarity reins in PCs, they will consider that as fact of the setting. So they'll question sanity/clarity of Changelings who behave in broken ways. If the Gm seems to allow NPC Changelings the latitude to be awful while not being broken, then the players may see a double standard or conclude something else is going on. GMs will have to consider that with some of the Changelings presented here who aren't described as mad, but ought to be more broken than the book suggests.

For Changeling adversaries we get nine enemies. Each has an NPC write-up with stats and backstory. In some case that individual serves an example from orleader of a group which is also described. So we get The Mad, The Bridge-Burners, and Privateers & Loyalists. Each type and organization gets some further interesting discussion. I found all nine pretty interesting and each sparked some story thoughts about how I might use them or a modified version of them.

The section also includes Mortal Enemies of two types: general antagonists (four of them) and those who have specific knowledge of the Changelings or have been touched by their power-- the Ensorcelled (five of them). There's some general discussion about each type that provides ideas. I found these more varied, with about five of them really sparking story ideas for me. Two just being meh, and two actually making me shake my head with irritation. That's especially true in the case of Vampire cross-over character. I'd consider this part less successful.

Section Two "Gentle Lords and Fair Ladies"
This section of Autumn Nightmares talks about the keepers, those powerful figures who stole the Changelings away from the world in the first place. I suspect a GM's reaction to this material will in part depend on how they few these adversaries. I tend to see them as distant and awful figures of immense powers, but alien and capricious in their thinking. There's a part of me that considers them more akin to the Old Ones in Call of Cthulhu. They can still be fought and dealt with but that ought to be a pretty significant and onerous task. However in some games the GM may have the Gentry as a more constant threat. The book seems to switch back and forth between those approaches.

There's a great deal of material here however. There's a discussion about various different histories and myths for the Keepers, along with specific examples of Keeper themes which seem to echo those sources. I like that it doesn't settle on one approach and provides great color details throughout. I like the various discussion of types and methods as well as ways to describe their powers and approaches more narratively than actually. Some new material, especially the ideas about Charlatans, Banished and the Inamorta provide great story concepts.

I found everything interesting until we got to the actual specific and statted-out characters. We get the details, merits, abilities and so on for these things which I think steals away more than a little of their thunder. Especially since the system itself with fairly rigid mechanics, kind of doesn't support those powers. But that aside, the actual example Keepers they present in this section feel boring and trite. More interesting are the earlier thematic ones-- as if providing more details and backstory for these things actually made them less interesting. That being said, the section as a whole offers a lot of ideas for GMs to mine from, it just may take some work.

Section Three "Horrors Within, Horrors Without"
The final section of the book splits into two parts: the first covering Fetches and the second covering Hobgoblins. Both received some treatment in the core book, but this section fleshes those details out.

Changeling the Lost's concept of the Fetch provides story opportunities that I'm a little stunned we hadn't seen before. The game takes that classic concept and puts it into play in a novel way. The Fetch, as a twisted duplicate of a PC can serve as a dark mirror, an adversary, a friend...a host of possibilities. Players also have ownership over that subplot in a unique way. Autumn Nightmare spends some time discussing different approaches to the Fetch and then adds some complications to that. It suggests some powers and abilities which they might possess. I like those details especially with the idea that as the PC grows in power and Wyrd, their Fetch may also. Some of the other variants provided suggest many different kinds of plots. The actual Fetch NPC vary in quality (seven of them)-- most sparked some story ideas but the rest fell flat.

I do think the fetch works best as one of those things the players learn of later in the course of the campaign. I think the core book for Changeling gives away too much about those-- removing the mystery and the potential suspense. One of the mechanics introduced there is that killing one's fetch can provide a mechanical benefit-- a milestone merit. While I'm not opposed to that in theory, I think putting that kind of freebie into the rules potentially encourages a certain approach to the fetch. Autumn Nightmares provides more milestone merits of the same kind here-- meaning power players may start hunting for the best result. The real question is how would they learn about these rites?

The book ends with Hobgoblins, dwellers in the Hedge. There's a little bit of background material which contradicts things elsewhere. There doesn't seem to be any significant difference between Hobgoblins and Hedge Beasts presented, despite a suggestion of Hobgoblin Societies, clans and types. We get an entry describing Hobs as a manlike subtype, despite the section continually using the term for cover all generic monsters. And we get some pretty generic monsters here. Some of them operate under fairy-tale principles which would never dupe a PC, making me wonder why to put them in. They're a mixed bag-- with only a handful of the thirteen presented actually sparking ideas for how to use them in the game.

Overall
Autumn Nightmares is a GM's book and I'd recommend it on that basis. Interestingly when I first picked this up a couple of years ago before I started my Changeling campaign, I didn't think much of it. It seemed uninteresting. I expected to have that same reaction when I reread it for this review. However on closer reading, I found both some new ideas and also some things which had penetrated my subconscious and I'd put into play. The book is light on mechanics and stat blocks, and heavy on ideas-- making it an ideal compromise for a kind of supplement I usually don't like.
Posted by Lowell Francis at 11:46 AM