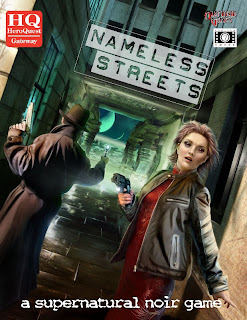 What is it?
A "Supernatural Noir" campaign sourcebook and setting for HeroQuest 2e.

Imagine the Crossovers...
Nameless Streets identifies itself as Paranormal Noir, a genre occupied by at least a couple of other rpgs. The newly released Dresden Files RPG is the most obvious of those, but we should also consider The Edge of Midnight which covered some of the same ground but with an alt universe open-magic approach. I may be wrong, but I don't think White Wolf ever did a Noir sourcebook for either old or new World of Darkness. Generally Nameless Streets presents a campaign frame which takes its cues from the rash of recent fantastic lit with detective protagonists (Anita Blake, Rachel Morgan, Harry Dresden, Allie Beckstrom, Harper Blaine, Joanne Baldwin, Kara Gillian, Jane Yellowrock, Kate Connor...holy cr*p there are a lot of these series...like the Harlequin Romances for a new generation...)

Take a Gander
I should note I'm working from a purchased PDF-- the graphic design is pretty good, although I was a little put off at first by the text design. The green page background takes getting used to. I would have liked a print version with the pdf as well. I do love the cover though-- one of the best I've seen recently.

System-Light or Light System?
HeroQuest 2e provides a feather-light generic system. The abstract nature of character creation, infinite possibilities for abilities, and avoidance of individual systems for gear and equipment means that any campaign sourcebook for this game will have to focus on the setting over the mechanics. At most the materiel will present some options, a frame or frames for handling magic and maybe a few minor variation sub-systems.

In this case, NS presents a few options. Flaws as abilities are given some depth with some new uses and as a means of generating Hero Points in play. It also suggests a fix for one of my concerns with HQ, dividing session-expendable Hero Points from character advancement. Most of the rules presents here are more suggestions and ideas rather than any significant alterations to the HQ engine.

Setting the Scene
Nameless Streets suggests a Portland, Oregon setting which seems a good choice. Most urban fantastic series tend to grab on to a particular city and make it theirs. At least in my mind, Portland's removed enough to provide some mystery. Probably the most significant presentation of the paranormal background for the setting comes in the section discussing Agencies-- what this setting calls communities. The rules suggest the PCs putting together and agency and then provides a set of examples of existing ones in Portland, complete with interesting NPCs. I like the way the book handles this-- a collaborative process for the start of a campaign. I've mentioned before my fondness for these kinds of approaches, and I can see borrowing some ideas from Reign to flesh this out.

HeroQuest suggests the creation of “Genre packs” to set up the basics for different settings. Nameless Streets provides one specific to Paranormal Noir. It includes a Baker's Dozen of archetypes, an extensive discussion on investigation in the real world vs. this one, and some example keyword sets for Private Investigators. The book makes a strange shift character creation to GM-centered material before switching back to how magic works.

Show Us the Magic
In HeroQuest magic operates the same as any other ability-- though how the GM structures that can vary from campaign to campaign. Some magical powers draw from a character's being a particular kind of supernatural creature (vampire, etc). But for more classic magic Nameless Streets opts to have a magical style as an “umbrella” keyword, with different abilities beneath that umbrella. NS first presents a fairly general structure to magic-- a difference between Low Magic, as a practical and sympathetic art, and High Magic, ritualized and exploratory. That's well-laid out, but pretty conventional if you're familiar with modern urban fantasy. NS then presents five magical styles-- which again are interesting and different from one another, but at the same time nothing new in this area. More color or specific community affiliations with these styles would have made them connect with the setting presented here. If you're building a Supernatural Portland setting, more than a generic paranormal game, then the system mechanics and details ought to be tied into the particulars.

One of the nice bits of freedom that HeroQuest gives is the ability to run a supernatural creature without a lot of excess rules baggage. Nameless Streets provides a typical set of such creatures-- with a focus on what playing those might feel like in the setting. This section covers everything from Angels to Animated Corpses to Djinn to Oni. There's a clear sense that the authors have followed all of the modern urban fantasy series and made them workable here.

Mysterious Mysteries
Nameless Streets also follows some other recent rpgs in taking time to discuss the mystery genre and how those stories get played out in a game like this. The book provides some structural ideas-- including design advice. There's an interesting mechanic presented here which has the GM building a mystery in the same way that they might a character. I'm curious to try that out to see what results. Several sample cases and adventure seeds are presented to help the GM walk through that process. The book ends with about ten pages of discussion of Portland as a campaign site, though from a very high level. I would have liked to have seen more material here-- about the structure and kinds of supernatural things going on in Portland. As it is, the most campaign interesting stuff comes in the section on the various sample groups and agencies. There's a great deal of potential there-- but Nameless Streets feels caught between two approaches, on the one hand a game presenting a specific supernatural city with its own rules and structures. On the other hand, a generic frame for doing any kind of modern fantastic game.

Portability
Having been done in HQ means that there's a relatively thin layer of mechanics which a GM might have to remove to port this over to another system. There's some nice campaign structure ideas here-- but it is more about a frame for a modern fantastic game than anything else. If you're running that kind of campaign right now or plan to, it is definitely worth a read through as a resource.

Summary
Nameless Streets gave me some ideas. It provided a concrete example of how HeroQuest could be used for a modern game. I suspect if I were going to run a Persona or Shin Megami Tensai campaign, I'd look first to HeroQuest. It also provided some thematic inspiration for what I might do with a modern paranormal detective game. I'm a little disappointed that the book doesn't have more on the specific Portland setting. Given the competition for eyeballs in this genre, I can see the value of being generic. However the risk of building more particular material would have been worth it. That being said, I'm pleased I picked this up and would recommend it.

Nameless Streets is from Alephtar Games and can be bought here or in pdf format here.
Posted by Lowell Francis at 8:01 AM