Rome: The Life & Death of the Republic: A "Building Rome" Review 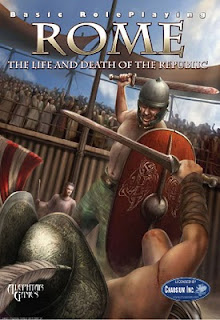 What is it?
A Roman sourcebook covering the period from the founding to the end of the Republic.

To begin: if you're thinking about running a campaign set in ancient Rome, you should buy this book.

Rome: The Life and Death of the Republic is a 220-page sourcebook for Basic Role-Playing. This comes from Alephetar Games who also did Nameless Streets for HeroQuest which I reviewed a couple of weeks ago. The layout's clean and the book mostly uses classic illustrations rather than too much original art. Based on these books, I'm going to put some of their other books Stupor Mundi, Merrie England, and Dragon Lines on my wishlist.

Pick Your Rome
It's interesting to consider how Rome has appeared in various media-- there's definitely a “sexier” part of that history. Most cinematic adaptations cover the period just at end of the Republic era or after- from Julius Caesar on. Spartacus would be an exception. Certainly on television that's the case as well: I, Claudius; Rome; AD, and so on. Historical fiction tends to follow suit-- all of the Roman historical mysteries take place after the Republic has become a memory: Roberts, Rowe, Saylor, Wishaert, Downie. So its worthwhile risk for someone do produce a sourcebook which covers not that period, but an earlier one.

Like Cthulhu Invictus, Life and Death of the Republic, concerns itself with a portion of Rome's history. However, where Cthulhu Invictus cut a reasonably-sized slice for itself, Life and Death simply splits the meal in half. It still takes on a huge swath of history, something it admits to right up front. But it also provides a comprehensive overview. We get from the founding of Rome as a monarchy up through the Civil War and the collapse of the Republic. This Rome isn't a timeless abstract-- the book discusses the evolution and changes of cultural details. Eternal Rome and GURPS Imperial Rome took on all of Roman history and, with the exception of the historical timeline, treated everything as static across that entire time period, Life and Death provides some details and options about how things looked in different phases of Rome's development. It breaks those explicitly down into The Monarchy, Early Republic, Middle Republic and Late Republic. It's worth noting that last period does get more attention (in terms of quotations and citation) but that makes sense.

Life and Death makes another unusual decision in focusing attention on what we classically think of as “Rome.” That is we stay in the heartland. Little attention is given to other countries within the Empire. Rome itself stands as a model for other cities in the Empire. That's a striking approach for material like this. On the one hand it means that the authors have room to deal with the core topics of their focus: Roman life, society and history. On the other hand, it does mean that GMs desiring a campaign that moves outside the confines of the Italian Peninsula will have to do some work. Some of the other Roman rpg resources might be useful, but GMs will be forgiven for feeling a little spoiled after having been given the depth of material here.

The Divisions
The book breaks down into fourteen chapters of varying length. While there are some sidebars and notes, we don't really get to any extensive mechanics and campaigns material until about page 120. In that first set of chapters we get coverage of Roman Society (20p.), Roman Culture (20p.), the city of Rome (25p.), The Games (12p.), The Army (18p.), and Philosophy and Religion (15p). Throughout the author provides extensive and interesting quotations from primary sources. Most chapters provide some ideas for player and adventures seeds in boxed text. All of these sections are well written and interesting. The section of the games is especially interesting-- showing how they grew out of other rituals and evolved from funerary rites. The discussion of other kinds of games and how those might be used in play is good. I also liked seeing the details on the changes in weapons, armor and service over time in the section on the army. Author Pete Nash also stops to discuss philosophies of the empire, an important factor. I could go on-- suffice as to say that the material is rich and covers a great deal of ground.

I should stop off an mention the tone and approach of this material; some may find it a little off-putting. Life and Death aims at achieving a kind of accuracy-- providing material so GMs can run a more realistic game. The focus isn't on verisimilitude, but simulation. The material talks about the kinds of attitudes, approaches, and mores which we in the modern world might find objectionable (especially on the issues of familial authority, women and slaves). It suggests that players will have to adjust to that. I think that's easier said than done. The book takes an authoritative approach-- providing facts and details, but with less on the topic of how that might get shown in play. Mind you the writing is strong enough to support that rigid approach. And there are some scenario suggestions for a few entry points.

Basic Role-Playing is a fairly simple system, so that material doesn't get in the way too much. Even once we get to the chapter on characters-- there's still more descriptive text than BRP rules. The section which follows on Roman Magic takes an interesting and open approach-- showing how the Romans spoke about magic and then how those ideas could be used in one of several approaches. GMs can pick from games which have no magic, psychological magic, or true magic. The guidelines given will take some work to put into practice, but the author gives the GM some excellent tools. Fifteen pages on creatures and monsters do provide stats but also some notes on use.

The material on campaigns will be generally useful to anyone thinking about a Roman campaign. It suggests several frames and talks about the kinds of details necessary to them. There's some discussion of alternate campaigns but these are more tidbit than meal. The lists of ten scenario ideas for different topics (Charioteering, Animals, Disasters) is excellent and I would have loved a few more pages of those. We also get some NPCs statted out and notable persons described. Interestingly the book waits until one of the last chapter to actually break out the historical timeline and walk through the 700 years. That's a good choice and one that reinforces earlier material and keeps it from being overwhelming. That's done as a table with events described in four areas (War, Politics & Law, Religion, the City). The book wraps up with a series of useful appendices as well as excellent maps.

Overall
This is a book for history buffs-- those who like a serious approach. But it is also incredibly rich for anyone wanting to carry off the spirit of Rome in a campaign. It doesn't do some things like a sense of the Empire or an approach to the supernatural which other books (like Cthulhu Invictus) do. But it is the most comprehensive, well-done and rich historical sourcebooks I've ever read. I can only how we might see more from this publisher, perhaps covering Rome under the Emperors or a book providing a look at the other parts of the Empire in this period.
Posted by Lowell Francis at 8:24 PM