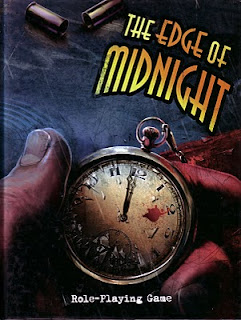 What Is It?
Noir 1950's with magic in an alternate universe.

Gaming the Lost
I wanted to look at a game I missed when it first came out about four years ago. In fact I hadn't heard about The Edge of Midnight at all until I came across a copy of Warlocks and Detectives, a supplement. The strangeness and detail of that book made me hunt down the core book for a read. At first I expected something like Cast A Deadly Spell or a noir version of the Lord Darcy series. Perhaps it would be a bastardization of the The Dresden Files. I'm pleased to say it isn't exactly that- it is a noir magic game, but it has strong idea of its story and interesting detail. While it isn't exactly what I wanted, it is a cool setting worth a look at for source material or to be run as a smallish campaign.

Preliminary Details
The Edge of Midnight comes in a 224 page hard cover. It can also be purchased as a pdf from Studio 2 Publishing. The line managed to support the core book plus three supplement books and a GM's screen. The publisher web page appears not to have been significantly updated since 2007. Given the core book has a pub date of 2006 that seems to suggest they went under pretty quickly. That's a pity since this is an ambitious and interesting game. Rob Vaux appears as the main author, with Kevin Millard, Ree Soesbee and Martin Hall listed as contributors. That's a pretty solid writing staff. The layout can get a little busy at times-- with some really dense text design. Still it maintains a complete impression.

What's the Story Then?
The Edge of Midnight takes place in a world that feels like late 1940's, early 1950's noir. That atmosphere pervades everything along with a kind of fuzziness. People remember that there was a war-- but not exactly when it finished and what happened. The details run away from people, even those who know that they fought over on another continent. People blame that on the Warlocks- though exactly why that is remains unclear. They did something? They caused this? No one can point to the facts. The vagueness and memory echoes Dark City obviously but it also fits with the timelessness of noir as a genre- things like Kiss Me Deadly feel like a fantasy sometimes as it is. I like that touch- and GMs can certainly play up the unreality and fabulistic nature of the setting.

The game presents a United States analogue, the United Commonwealth, with important cities being stand ins for Chicago (Central City), New York (Nova Roma), and Los Angeles (Paradiso). Locations outside the country don't really matter so much. A couple of key elements besides time, memory and names make this different from our world. First people called Warlocks possess magical talents. However such talents make them pariahs-- magic use has been made illegal in a move the book compares to Prohibition. Warlocks exist at the fringes, where they're useful but any who get in the spot light or cross the powers that be get arrested. The other shady underworld is almost a literal one with the presence of Gaunts, the term used for people who have contracted an infection which changes their physiology, apparently magically. Stronger and more powerful they appear hideous and cause physical discomfort in normal humans around them. They exist as a feared minority with their own society hidden away.

The Edge of Midnight presents magic not as classic witchcraft or sorcery. Instead it takes the form of Warlocks being able to manipulate forces. They can learn “scientific magic” skills in six areas: Electricity, Gravity, Kinetics, Magnetism, Tensile Energy, Thermal Energy. Some other factors affect Warlocks including magical addiction and corruption. The idea of magic as a kind of extension of pure theoretical science-- but still treated as wizardry and feared threw me off. I expected perhaps a more Call of Cthulhu or Dresden Files approach to magic, with creatures, mythology and all of the classic trappings. The choice does limit some things, but plays into some of the greater suggestions of the background. I'll come back to that.

Getting to the Crunch
Generally I'm not a mechanics guy-- and certainly I went into reading The Edge of Midnight with the idea that I could adapt the setting to another system. That would be a pretty easy task as it has quite basic mechanics. The game has both attributes and skills, rated from one to ten. There are six attributes (Brains, Brawn, Build, Gut, Moxie, Smoothness). I like the use of genre-appropriate names, though it means having unusual terms. The pool of skills is limited which can be a plus- it means any one skill has more utility. Of course that includes some catch-alls like Lore, a general Perception skills and the odd Puzzles skill (something I don't care for in games). The rules allow characters higher starting values in attributes than skills, but interestingly those two factors aren't directly additive in resolution.

I have to mention this since it isn't a mechanic I'd seen before. In The Edge of Midnight players make tests against a target number given by the GM. The player rolls 2d10 and add one die to the appropriate attribute value and one die to their appropriate skill rank. If both totals beat the target number it's a complete success. If only one does, you get a partial success. That's an odd mechanic and one the surface reminds me of the ORE mechanic in that you can gain two+ sets of information from a single roll. A general read doesn't seem to suggest any other special uses for that effect. In some ways it just seems like an added complication.

Characters get to pick “up to three” additional “backgrounds” which provide bonuses, from a list of twenty-seven. Eight of those apply only to Gaunt characters and three to Warlocks. There's no explanation as to why someone wouldn't take the full three as there's no drawback to them. That's an oddness that happens through the text-- moments which make me stop and reread. Players also get to pick a Profession which gives some added benefits. But generally it's a basic character creation set up and a simple system.

The Party Problem
If there's a problem in the mechanics and the set up it lies in some open questions about what a group ought to look like. It seems to be written with the idea of a mixed group of PCs in mind-- with one or two Warlocks and perhaps a Gaunt. An all Warlock party is suggested as an exception rather than a rule. But the game doesn't offer that much in the way of “cool” options for players who don't play Warlocks or Gaunts. Those approaches get a ton of material and discussion-- leaving other archetypes with nothing to help set them apart. That's a problem that needs tweaking in a setting like this.

The book does provide an interesting linking reason for why the players would join together. That's tied to some of the secrets of the world, so I don't want to spoil too much there.

The game provides a lot of good material-- NPCs, city descriptions, ideas for groups, locations, plot hooks and such. There's a really excellent and extensive bibliography for inspirational material of all kinds. There's a solid index to boot. The only thing missing would be a sample adventure, but I spotted a couple on the publisher's website. The Gamemaster section does provide a number of ideas about the secrets and reasons behind the setting. There's a canon version which I liked, as well as a couple of other variations, each of which have some appeal and could be great for a medium length campaign ending up with some revelation about those concepts. There's also mention of how one might make this echo Dark City even more closely...

Portability
If you're looking for a new and interesting campaign motif which could be easily adapted, I'd recommend tracking down a copy of this. The mechanics could be easily replaced and, quite frankly, I think this could work better with another system. For example, one could do a Gumshoe based game using some of the ideas from Mutant City Blues-- magic could operate under the same structural principles as the Quade Diagram from there. While the setting has a strong logic to it, GMs could twist it to be more classically magical. That would make this more of a location and framework resource.

Overall
I'm glad I found this. It doesn't break any new ground mechanically but what is presented is a solid and well-crafted campaign setting. It reminds me of the best campaign frames put out for Savage Worlds (Necessary Evil, Rippers). If you like noir and urban fantasy, it is worth a look.
Posted by Lowell Francis at 7:22 AM