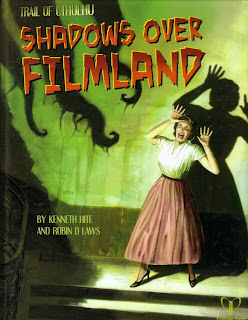 What is it?
Adventure collection for Trail of Cthulhu (reviewed here) based on the themes and imagery of 1930's fright films.

Flicker of Fear
Gumshoe creator Robin Laws and Trail of Cthulhu author Ken Hite both contribute to this collection. They begin with a substantial discussion of the genre they call “Backlot Gothic” (though I also like the other term they throw around “Silver Nitrate Mythos”). The collection begins by considering the monster movies of the 1930's and how those archetypes (Reanimated Corpse, Mad Scientist, Old Dark House) fit with Lovecraft's ideas. it then ties particular themes of literary horror and the Gothic (Psychology, Blasphemy, Economic Fear) to the kinds of movies coming out of Universal and RKO.

Lovely and Creepy- Can It Be Both?
As before with Trail of Cthulhu, Huguenin has created a book of sinister beauty. The cover art looks a little cheesy, but that's a deliberate effect. Everything else carries on the atmosphere of the earlier volume. It is a 192 page hardcover, which means it is a little pricey-- I'm more used to modules and adventure collections being softcover. But the price is worth it considering the quality.

Opening Shot
From ideas about that film period, the authors craft a new setting-- not historical, but more thematic and impressionistic. There's nice discussion of how to create that feel for the scenarios which follow or user created campaigns. The book describes a host of settings and sites-- each with visual details and NPCs which can be used to illustrate them. Finally Hite and Laws also provides a couple of pages of plot hooks for Backlot Gothic. I love the introduction-- well written and a pleasure to read. It brings little Gumshoe baggage with it-- the initial twenty or so pages of genre material is...generic. GMs could use this with any setting.

Each of the eleven adventures follows a simple but effective structure. An introduction lays out the thematic concerns-- usually talking about what particular movie or movies this adventure references. We then get “The Spine” which lays out the basic plot. Next “The Horrific Truth” presents the key crisis. Each adventure is nicely broken into clear scenes, providing the NPCs, events and possible investigative clues. The text is supplemented by an excellent array of sidebars and margin notes providing new rules and clarifying details. Most of the adventures have a pretty straight narrative thread, but with more a sense of inevitability rather than GM railroading. Core clues branch at the outset but eventually narrow the approach down.

Spoilers!
The book touches on most of the key monsters and tropes of the period. That being said, no adventure feels conventional. They've been drawn carefully through a modern and dark sensibility-- making them particularly creepy and resonant. The adventure “White Bokor” connects directly to the classic film White Zombie-- taking up the day following the last scene of that movie. Elsewhere we have such things as classic Mad Scientists, Werewolves, Mad Gorillas, Invisible Men and the like. But those are still tied into aspects of the Mythos as well. What would be an Egyptian adventure without Mummies-- and temples filled with horrific shrines to the Old Ones? We get references to Herbert West, Yog-Sothoth, and Pickman. However, these serve as chrome on the adventure and a GM could likely run each of these as a fully non-Mythos tale. Still I like the idea of subtly infecting player's memories of these films with Cthulhu references-- they'll never be able to look at them the same way again.

The adventures take place all over the world. In games which buy into the loose and impressionistic reality of the "Backlot Gothic," this shouldn't be a problem. “As you find yourselves in the the back country of a European province...” should be a setting invitation. There are a few references of connection between the various adventures-- and suggestions for alternate locations. One offers a team-up of villains from earlier adventures.

A couple of the stories offer interesting narrative tricks-- the revelation of an investigator's degenerate lineage, possession by otherworldly spirits, which make them especially interesting for one-shots. The final adventure in the book relies on the earlier adventures-- or the existence of a campaign sequence before it. I don't want to go into too much detail, but the investigators find themselves on the set of a movie called The Call of Cthulhu...and there may be some familiar moments in the script.

Portability
I think these adventures could be easily adapted over to over game systems, so GMs running BRP Call of Cthulhu could easily make use of them. As I mentioned earlier, the Mythos elements in each could be reduced for use in a more standard horror game. However the adventures rely on certain thematic and atmospheric elements-- so I don't think the structural plots themselves could be adapted to another genre (fantasy, steampunk, etc) without really losing a lot in translation.

Overall
This is a good solid book of adventures. If you're a fan of monster and horror films or the 1930's and 1940's (Browning, Lang, Lewton, etc) then I highly recommend it. If you want some atmospheric adventures for your horror, Trail of Cthulhu or Call of Cthulhu then this would be a good choice. If you want something more conventional in the way of adventures, then perhaps another resource might be better. I have only two reservations about the volume. One, it is a somewhat pricey hardcover. Two, in my copy several pages at the end were misordered-- the book is complete but out of sequence for the last dozen pages. Check your copy before buying.
Posted by Lowell Francis at 10:20 AM