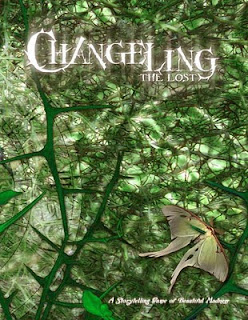 Pitching Changeling
I'm on year two of a Changeling the Lost campaign and it remains one of my favorite published settings. (For a Geeklist of the session reports, see here). I mix between using heavily modified published settings and my own work, usually leaning towards the latter. I'll admit that when I run too long in a published setting I feel like I'm wasting effort on something I don't own. I've run Vampire: the Masquerade, Legend of the Five Rings, and Scion-- all with a small sense of irritation building up-- but I haven't hit that with Changeling. I think it is a dynamite and innovative modern magical setting, more appealing than any of the other offerings from the nWoD and strong enough to stand up on its own as a great concept.

Not nWoD
But I should note that I don't use the World of Darkness rules. I dumped those immediately and the material to our homebrew (Action Cards). In a series of reviews I'm going to walk through most of the Changeling line of products, looking at what they provide, how well they do that, how that changes up the game's core concepts and how necessary that particular book might be. This is aimed at people interested in modern urban fantasy, nWoD players who haven't yet looked at this line, and kit-bash gamemasters who what to see some interesting ideas to lift.

The Short Pitch
In Changeling the PCs take on the role of people who have been kidnapped from our world. Through trickery, bad choices or random happenstance, they have been pulled over by The Keepers into an otherworldly realm. The process strips away much of the victims soul, caught on the thorns of the Hedge they're drawn through. The Keepers represent dark and awful versions of the fairy stories and the fantastic. During their “durance” these kidnap victims become transformed by their service. Then, somehow, they manage to escape from their service only to return to the real world, a changed person. Time has passed, in many cases they've been replaced by a simulacra or Fetch. Now the characters must hide their changed appearance beneath a mask of illusion. The barely remember what they suffered in the Hedge, and when they do, then run the risk of a breakdown. They must run the thin edge between trying to adapt to human society and embracing their changed nature-- all the time living in fear that their Keeper may hunt them down and steal them back.

Characters
Players choose from one of six Seemings which broadly define character's “race” and then pick a kith from that Seeming which determines a special ability as well as some other characteristics. The Seemings of Changeling are broad and thematic-- for example the Darklings represent darkness (obviously) but can also be characterized by obfuscation, the weird, avoidance, isolation, silence, strangeness, loneliness, and so on. A character's durance can provide a story for how they became the way they are. A classic Ogre story might be one of being chained under a bridge and forced to hunt for tolls, while a Wizended might have served in a place which seemed more like a Kafka-esque psychological testing facility. The framework Changeling provides can easily be manipulated to create a wide variety of character types-- with a narrative sense coming before a mechanical placement.

Scattered Thoughts About Changeling the Lost
*The durance itself serves as a great hook at the table. Do the Changelings talk about them? How much do they remember of those times? Memories are a commodity, so how much can they trust of those? In our group some players envisioned a particularly horrific durance for themselves-- suffering and torture outside their control. Others imagined themselves as being in a position of power in the durances. In the latter case, only once they return to the real world do they start to recall and realize the awfulness of the things they did while in the head-- not necessarily tortured, but instead as torturers?

*More than any of the other “reboots” of the original material, Changeling significantly changes and improves the source material. I think an argument could be made that Mage, Vampire and Werewolf all bear a striking likeness to their predecessors. Details of their premise may have changed, the key concepts remain the same. Changeling the Lost, on the other hand, feels very different from Changeling the Dreaming. Instead of a kind of gothic whimsy with dancing around imaginary landscapes, with have PTSD suffering transformed persons trying to put their lives together and avoid the boogeymen of the world.

*The question of trust holds an important role in this setting. There's a strong contradiction-- through trickery or force the characters found themselves enslaved. The world of the Hedge was one of betrayal. They escape only to find themselves isolated from the world they once knew. To survive, Changelings must band together, but at the same time they fear those bonds. Throughout the game there's a strong dialectic-- things which you need to survive may go against your very nature. One cannot be part of normal world, yet one cannot be apart from it. Power is gained through pledges which have a cost to them. Even magic items have a drawback which can be as deadly as the object is useful.

*The Keepers looming large over the setting. They're the supreme adversaries and should be withheld as a serious and awful threat. This being a game however, we get stats for them making them either overwhelming and Cthulhu-esque or much weaker than the stories would suggest. The book and the setting provide a host of other adversaries-- some more interesting than others. Depending on the kind of campaign, you may find the group facing off against other Changelings, Hedge Creatures, Humans or other general supernatural threats.

*Changeling the Lost takes a meta approach to the sense of stories and legends which represent the Changelings and the fae. Classic versions, the western tales, make up only a small portion of the available choices. Anything can be thematic which has been used to shape Changelings. Stories and imaginings have been twisted to serve the ends of the Keepers. That really opens up the setting-- creating a kind of Urban fantastic setting large enough to hold a variety of different campaign types.

*Campaigns could center around return of the Changleings to the world and their finding a place. They could, on the other hand, be about the politics of life among the Changeling Freeholds. A campaign about those who hunt in the Hedge could open the game up to a greater level of the fantastic, while one about monster hunting in the real world could be more crunchy and mundane. The relative isolation of the various nWoD means that GMs can concentrate on one line without feeling as though something's being left out.

*The system operates with mechanics for “legislating morality” which some GMs may find a problem. Myself I dislike it and find it hard to work with (even in games like L5R with a fairly rigid set of rules). Here Changelings have Clarity which measures their mental state. Changelings with high clarity see the world as it is, with stark realism. Changelings with lower clarity see things at the edges of their vision, feel the overlap of the imaginative with the actual and have trouble differentiating between reality and illusion. Clarity can fluctuate based on contact with the supernatural and magical, but the main purpose in the game seems to be as a stick to make sure Changelings don't misbehave. I like the idea that realizing that one's actions are closer to a Keeper's choices than human morality, but that still requires the GM imposing some values on the player. In obvious cases it can work, but marginal ones may feel like a punishment.

Overall
I've only sketched a little bit here about the setting and the material. I want to encourage anyone who likes modern mythic or supernatural to take a look at the Changeling rulebook. The core rulebook has a good deal of material. There's a chunk of mechanics but source ideas as well. It's a good starting point, especially if you can find a used copy to try out.

Portability
I've converted Changeling over to another system with some work. That conversion requires the following considerations:
*Contracts serve as the magic and powers for the game-- those have to be reworked in a uniform and balanced way.
*The Seemings and the Kiths have to be converted. Each one has a single, simple power so the trick is to make them interesting. A couple duplicate if you do some mechanical reductions on them so you need to think about how to make them different.
*Figuring out how to handle Glamour, Wyrd and Clarity in the new system-- all characteristics unique to the Changelings.
*If you plan to carry over the merits and flaws, how those will fit in.
*The mechanics for pledges and pledge-crafting should be considered.

With those mechanical conversions in place you should be able to run a campaign relying on the source material alone.

In the other direction, the concept of Changelings could make for a great NPC group or people in a modern supernatural game. They fall into an ambiguous category-- neither wholly good nor evil which could make them a challenging group for your party to interact with.
Posted by Lowell Francis at 10:42 PM