I know it has been some time and I'm a little loathe to contact you, but now I know I have to warn you. I didn't take you perhaps as seriously as I should have the first time, but now it has returned.

I remember reading about it years ago when it first came out. Translated from the Polish someone said, a game unlike any other. Then within an hour of my curiosity being piqued you sent me an email. Would I like to try playing a new game you'd found, De Profundis? At the time I took it for an amusing coincidence, but now I see that it wasn't that. The book had plans. Our abortive attempt to play it, with only a few letters exchanged between us- that was the damnable thing laying a seed inside our heads. Perhaps it could not fully bring itself forth into our world yet. Perhaps the stars were not right.

I fear that they are in alignment now. For now there comes a second edition of this game-- more extensive and more dangerous.

At this point I'm certain that you will be shaking your head. The last time I spoke with you about De Profundis you looked at me as if I was mad. You claimed you'd never played such a game, never even heard of it. It had made you forget, but I remembered to an unknown purpose. Please believe me that you have played-- perhaps in my describing it again, a recollection might stir.

De Profundis is a role-playing game, though saying that may be stretching the definition. Certainly there are those who would not recognize it as such: it lacks a gamemaster (though perhaps there might be an organizing force...), a conventional play structure or even a resolution system. Instead it is closer to the shared narrative of something like Baron Munchausen or Fiasco. You may dismiss that out of hand and perhaps if you do so you might be the better for it. But let us assume that you are intrigued and wondering what kind of a 'game' this might actually be. Maybe you've started to recall our earlier encounter with it. Or perhaps not.

It styles itself as a psychodrama, an odd term. In that it suggests that the players, the participants as the book terms them, will not necessarily explore a plot-driven story. Instead they will carry out the exploration and reflective dissection of the character they decide to take on. That exploration comes through the exchange of letters, missives, notes and perhaps even ephemera. In this it resembles the style of Stoker's Dracula, that novel built from correspondence, annotations and fictitious news clippings. For a more modern version one has to look to something like Griffin & Sabine or even House of Leaves. Of course we argued over that latter book before, whether it exists as a true book or dread or simply executes a literary magic trick. But the real precursor, the spiritual and explicit grandfather of De Profundis is the work of H.P. Lovecraft.

In that sense, it is another Call of Cthulhu game, but very different. It stakes itself on discovery, rather than investigation. As a game format, it could feed on any genre-- but somehow this is more appropriate. And I suspect De Profundis has its own ideas for why the Lovecraftian Mythos must be at the core. One can play oneself, select an old Call of Cthulhu character, or even chose someone from one of the original HPL stories. That selection merely sets the scene and the background; no one has a character sheet as such. What's important is the persona they inhabit in the play of this psychodrama.

The 'rules', such as they are, provide guidelines and suggestions for how to carry out and support the mood of such play. Some might dismiss the game as simply a fancified forum thread: an exchange of letters form the narrative. It could be that, I suspect, but the text provides keys for other paths. Methods for establishing timelessness, for marking play, for the physical nature of the game carried out in actual parchment, action versus experience...all of these things. Though it may seem like a passive game, there exists a passive and an active position in the play it discusses. You might be a subject without even being aware of it. The language of the book itself draws the reader in. As I warned you...I did warn you, didn't I?...De Profundis plays with you even as it reveals its secrets.

The first half of De Profundis lays out these things in hints and suggestions-- beginning with an extensive abstract presentation of the concepts. Two smaller sections follow on how to visualize the secret world necessary for this writing. It becomes almost a relief when the tone of the dreadful thing shifts halfway through- finally becoming more meta, like a conventional rulesbook. Beware, though, even that's a trick to lull you in with the excellent discussion and make you forget the brain worm it strives to embed in your consciousness. It provides mechanical tools which some may grasp as a reference point. It may give them a sense of familiarity...but on closer examination those tables are a straw-man, a scarecrow pointing down a dark road. Wait...

I'm sorry, I thought I heard something, but it was only the rustling of the pages. I purchased this game on pdf, but somehow everywhere I look, out of the corner of my eye I see it. It seems to have bled into my thinking about other games. I must put my copy of The Armitage Files down in the basement where it will be secure.

Where was I? Yes-- De Profundis wants to be larger, wants to be used. The Lovecraft connections reveals its true heritage, but it could easily infect other genres: fantasy, the mythic, historical...all could fall victim. I suggests that such a play could be used to complement an on-going tabletop game- to provide another perspective. There-- you see how it tries to extend its tendrils? The vivid examples of play at the end of the book stay with me even now-- creating more ideas for bringing De Profundis into the world. I even suggests how one might use this in an electronic medium without losing the atmosphere...reaching a broader audience.

Which is what it wants...I see that now.

The most important thing is that we must not allow reviews of this game to be posted on the internet-- good, bad or indifferent, they can only spark some dark thoughts at the back of readers' minds. They'll be clicking through some easy shopping site and it will pop up in a sidebar, the Adsense of Azathoth as it were. They'll buy it, download it and then they'll read it. The game itself compels me to give it a positive review-- to speak of its potency and how it can get into the consciousness. I must resist, I must not review it... 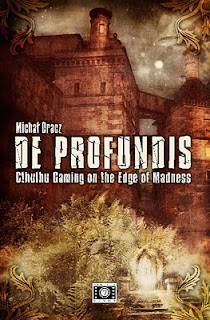