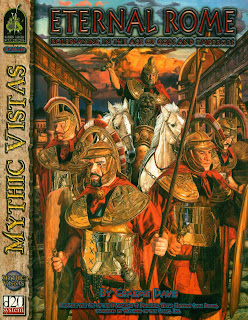 What Is It?
Ambitious attempt to fit all of Roman history into the d20 system.

All Hail the d20 Revolution?
Say what you like about d20 and the explosion of “supplements” that came from it, it did encourage designers to create interesting and ambitious projects that might not otherwise have seen the light of day. In some cases that was good, in others bad. So my Building Rome series (details here) I'll be skipping a lot of Roman-esque d20 materials. I'll leave out the various Legionary/Gladiator class-based microbooks with new feats, the generic historical materials for OGL, fantasy Roman analogues, and even some interesting stuff like Mongoose's Gladiator book.

Green Ronin's Eternal Rome fits into their Mythic Vistas line. That includes Testament: Roleplaying in the Biblical Era; Trojan War: Roleplaying in the Age of Homeric Adventure; and Egyptian Adventures: Hamunaptra. Eternal Rome explicitly mentions the first of those two as compatible, though bringing them together might be a stretch historically speaking. As a side note, the Mythic Vistas label seems to have been really odd and arbitrary, especially when you consider it also included Damnation Decade and The Red Star Campaign Setting. Eternal Rome presents material to allow d20 GMs to run a “Roman” campaign-- and my air quotes are deliberate there.

This is a Green Ronin product- well done in terms of layout and presentation. There's a great deal of material here with a fairly tight and small-font book design. While I'm not fond of the cover on close inspection, interior art-wise I do love me some Kent Burles.

We're Going to Need a Bigger Book
So let's begin with the big criticism. Eternal Rome tries to cover everything from the founding of Rome to the Fall of the Empire. That's a pretty huge span to deal with. It means the details get filed off in many places. Even the monumental rpg supplement Rome: Life and Death of the Republic “restricts” itself to the period of the founding to the end of the Republic. Eternal Rome opens by mentioning and glossing the historical periods in just two pages. That's an interesting approach and one which echoes the way RPG source materials tend to deal with history. It does suggest that the GM who wants to run a Rome campaign will be angling for verisimilitude over accuracy or simulation.

The d20 Catch
d20 materials tend to be a crapshoot for me. I'm not a d20 player but I suspect even if I was, I would quickly burn out on the tiny variant takes on the same material over and over again. Having looked at a number of “revolutionary” treatments of martial arts in d20, I can pretty quickly identify which ground they're retilling. As a non d20 GM then, I hope that the mechanical material will be minimal, flavorful or at the very least transparent. On that count Eternal Rome does pretty well- I rarely found myself having to skip over large chunk of text because it devolved into mechanics or stat blocks. Even where it provides system relevant discussion, those usually had some interesting ideas- useful for consideration when converting.

Classical Structures
Eternal Rome opens with the usual character creation material-- and a reasonable discussion of various cultures. We get the usual addition of new standard classes, examination of old ones, and outlines of prestige classes. These end up worth reading as the provide insight into the culture-- a discussion of culture-specific Bards, the Gladiator class and sub-classes, the Crime Boss, Pankretiast, Soothsayer, Vigil, the Orator, etc.-- there''s mechanics there but also some good background. We get some sidebar useful digressions and heavy attention paid to the military details. Between cultures, classes, skills and new feats this material takes up forty+ pages of the 160 page softcover. Following that we get eight pages of equipment and then a section on magic. Roman magics mostly handled through some shifts of domain. The rules do introduce new setting-specific spells for flavor tor to support the new mechanics introduced (such as the Celebrity spell). The Roman specific magic items are a nice touch.

My favorite section here deals with the concept of Fame as a trackable trait. PCs can undertake actions and adventures to build up their Fame and increase their social position. It's a nice piece of mechanics and provides a set of considerations I hadn't yet seen elsewhere. The author makes an explicit parallel between in that the “Fame” stat of this setting and the Piety of Trojan War and Testament. That in itself is an interesting comment on the culture. Fame in the game has practical and mechanical applications and the rules also suggest costs and requirements for keeping it.

Other sections do a pretty standard job. The Bestiary provides useful suggestions for standard creatures by region. Previously appearing SRD (I assume) creatures originally drawn from Ancient World mythologies get some context comments. A few get notes on how to shift them closer to their original sources (Basilisk, Lemure). We get four pages of new monsters with stat blocks and a Races section tries tries to connect some of the legendary races and present them as PC types.

Back to Background
Late in Eternal Rome we come back to an overview of the Roman world. The whole of the Empire gets a more comprehensive treatment, but still only in eleven pages. That's enough to give flavor, but not enough to provide a real campaign background. It could help GMs sort out where they might locate a campaign and point to future research. The author provides adventure and campaign hooks for each area, something I like. Next we get twenty-four pages providing the history of the Empire- spanning 1200 years. As with the quick national survey, this can only provide a modest tour. Depending on the campaign, such details might be used for background and color. It could help a GM choose a particular time period, but they'd still have to do the heavy lifting of research on that specific period (or remain more distant and vague).

Probably the most generally useful materials will be the fourteen pages on Roman culture and seven pages on religion. Again both sections take a timeless stance--despite the massive changes which occurred in both over the millennium plus of the Empire's history. Still if you're trying to capture the flavor of Rome you could do worse than this. It ties into the earlier discussion of fame, with a good explanation of the patron-client relationship as well as various offices of the Empire. It's condensed, but squarely aimed at a GM and how they can provide a reasonable backdrop for the players. The religion section waves between that approach and giving the mechanical d20 connections for cleric-types in a campaign like this.

Eternal Rome wraps up with a nine-page scenario with some additional historical detail. We get a two-page bibliography of materials, fairly comprehensive. While that's interesting it isn't as useful as it could be. This isn't a book report-- instead this list ought to help potential GMs find new resources. A few comments or at least putting an * by really useful texts would have helped. On the other hand, Eternal Rome does provide a two-page index something which ought to be standard in dense books like these.

Overall
Eternal Rome manages to keep up an illusion of comprehensiveness-- there's a ton of stuff and details about an idealized and timeless Rome. That's a decent resource for a GM thumbing through and looking for chrome or details to throw at the players. Some sections have a great depth-- the ideas on fame, gladiator sub-types, the Evil Eye-- but they stand out given the thinness of other sections. This book works as a decent introduction and overview, but those familiar with Roman history will be more picky about what they find useful here or be bothered by the level of glossing over.
Posted by Lowell Francis at 11:17 AM