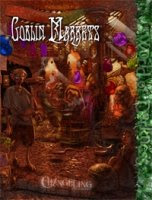 What Is It?
Exploration of Goblin Markets in Changeling the Lost.

A short review today, and number 30 if I count the mini-reviews for Edge of Midnight as three separate items...which I will. So October almost over, Happy Halloween.

The Front Gate
Goblin Markets is the last publication in the Changeling the Lost line. At first I was a little sad to see this game go, but its become clear that most of the new World of Darkness will be reaching the same tepid conclusion. With a switch to a digital, non-print strategy and a focus on an MMORPG based in the old World of Darkness, I think we can expect diminishing output. This is doubly bad because the last several Changeling supplements have all had some great material, and Goblin Markets points to a way the line could continue; not with full books, but with substantial and interesting explorations of different topics.

Goblin Markets, of course, deals with the classic magical markets which exist at the margins of the hedge. Hellboy II, of course had the best and most vivid example, but DC Comics' Books of Magic also has a tour of one. Harry Potter's Diagon Alley owes more than a little to that atmosphere of nervous worry over magical sales. It might be worth considering Stephen King's Needful Things as another great example.

So this pdf-only supplement sets out to provide some further discussion of the topic previously hinted at in the books. It does but up against some of the earlier depictions of the Hobs- leaning more towards them as organized and societal. The material here is presented with White Wolf's Storytelling Adventure System, a rule-lite approach to allow it to be easily ported around. The pdf itself is 49 pages long; 9 of which are fluff text, full-page illos or ToC.

The Stalls
The first chapter sets out the basics of how such markets work and most importantly for play, how they interact with changelings and the Freeholds. It actually provides some nice depth to the interplay in that the Courts have to tolerate the existence of the Goblin Markets or risk them vanishing or even acting against them. That balance has a number of story ideas in it. There's a nice discussion about the “goblins” themselves which adds new depth and gives the GM some new tools for adversaries and allies. The chapter also discusses the layout, rules and types of Goblin Markets which might exist. There are some brief but inspiring examples. I suspect GMs will only ever use one of these, but I also like the idea of battling Goblin Markets.

The second chapter talks about the kinds of things which might be found in the market-- for hedgespun to tokens to Goblin Contracts. I especially like the idea of the geegaws and tiny devices which have only a modest ability or strange effect. I'd buy a pdf of just ideas for things like these 0-dot tokens. Of course other more dangerous things can be bought and traded in the market- abstractions, slaves and even destinies. There's some discussion of how to handle bargains, trades and costs. GMs will have to take a look over this carefully. Do you want to allow players to simply spend points or should there just be a narrative to get something- or some combination of the two. Of course the kinds of bargains and items found here can spark new stories in a chronicle. The discussion here covers a lot of ground- there's little wasted space.

The last chapter presents some plot hooks, NPCs and story ideas. The storyteller characters here are generally pretty interesting and imaginative. There are a couple that didn't immediately grab, but most cooked up plots on first read. I would have liked perhaps some suggestions for hooks with those characters. Those details are useful for a GM offering more ideas about how to integrate them into the game. I appreciate the suggestions for how to role-play the NPCs, but it seems less useful. After the NPCs the book offers two quick scenario hooks (perhaps a page each) using the Storyteller Adventure System layout. They're OK, but feel a little tacked on.

Portability
A Goblin Market's an interesting site to drop into any game of the fantastic. The basic premise is fairly universal. This book offers some ideas which could be easily exported elsewhere. For GMs looking to convert Changeling as a whole to another system, there's little work which would have to be done for this.

Overall
It's kind of sad to see the last supplement in a game line. I have a fondness for something being complete, but at the same time it seems like there still exist interesting aspects which could be developed. Goblin Market's a nice showcase for how they could have moved forward. Overall it is a decent book and a solid purchase for any Changeling GM.

Changeling the Lost remains for me the most accessible and interesting of the new World of Darkness line. It offers characters trying to overcome their wounds finding their place in the world. That's certainly my take on it, but it also offers entry into a more fantastic setting- depending on how one wishes to take it. The characters could be involved in Courtly matters or could be avengers against the Gentry who stole them. I can see such campaigns feeling very different, but equally interesting.
Posted by Lowell Francis at 12:10 PM