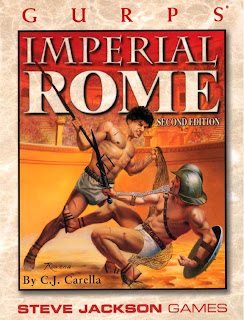 What Is It?
Another "All of Ancient Rome in a Single Book" product but for GURPS this time.

Geek Lurv
Allow me to briefly flash my Geek Badge-- our group started playing GURPS when it first came out (and before that as Man-to-Man). It was one of the few games that different players in the group would consistently buy supplements for. Within the group pretty much any book would find an audience, often of just one, who would pick up a copy (with a few exceptions... GURPS Witch World). One of the things the GURPS line did that few other companies were doing tat the time was historical material. That ranged from being general, GURPS China, to a certain historical thin-slice, GURPS Old West, to more legendary, GURPS Celtic Myth, to the more literary, GURPS Arabian Nights. Of course in a line that big you'd get some less than useful books (GURPS Japan, GURPS Religion, GURPS Riverworld) alongside some really excellent ones (GURPS Voodoo, GURPS Chtorr, GURPS Steampunk).

All Too Much
As with the last book I talked about in my “Building Rome” series of reviews (explanation here), Eternal Rome, GURPS Imperial Rome attempts to be a comprehensive sourcebook for Rome campaigns from the founding to the end- 1400+ years. And as I said there, in a few more words, that's a crazy way to approach this- if you're trying to have any kind of realism. Now I know realism a dirty word to some players- it suggests a canon or restrictions. But the realism I'm talking about is the kind that gets it right that Woolly Mammoths don't appear in a game set in 1920's Chicago...usually. So another rpg goal would be verisimilitude-- where it seems pretty right and keeps the illusion. That's the Rome of movies and television shows- which is an honorable approach, but one that does require some narrowing in to get the details that most people know about-- and honestly most people know or think they know from the end of the Republic up through perhaps bad stuff happening to a corrupt Empire (let's fix Gladiator as a representative of that). Of course GMs may be reaching for an even further kind of atmospheric illusion-- like saying that Legend of the Five Rings is a Samurai game...versus saying it is a Japanese Tokugawa Samurai game. But that whole level and right approach to doing history is for another discussion, though I've engaged with it a couple of times before.

This is a GURPS Third Edition product and if you've seen one then you've seen the book design of all of them. In particular I'm looking at the Second Edition of GURPS Imperial Rome. The art's serviceable, but nothing really stands out. On the other hand this is written by C.J. Carella and I have to admit he writes well. Most of this, even the mundane bits, reads smoothly. Finally as this is a GURPS product we get sidebars-- lots and lots of sidebars. Often the most interesting bits come in here little details and interesting twists which don't fit in the main text. It can make quick skim through fun or annoying depending on your perspective.

I'll Have the Usual
GURPS Imperial Rome follows the Overly Ambitious Historical Supplement playbook. First 20+ pages on Roman society treated as a static thing despite the evolution of it over hundreds of years. Next a character creation section which provides nearly all the mechanical bits for the supplement: character archetypes, skills, advantages, wealth table, equipment, martial arts and so on. Then eighteen pages giving a history of Rome, followed by an overview of the lands and peoples of the vast Empire done in less than ten pages. It is the Cliff's Notes version of this material-- more hinting at things the GM might find useful than actually providing materiel for table play.

Mining for Gems
So what does GURPS Imperial Rome offer that stands out? The first would be the more in-depth treatment of the Roman Legions. The book devotes 17 pages to them. Of course six pages of that end up tracing the history of the Legions across the wide historical period the book takes on. But it does also provide a good discussion of tactics, the officers and hierarchy of the Legions, and the typical life of the Legionary. Only few mechanics come up here (salaries and weaponry, for example).There's a nice overview of the various important military enemies of Rome and what they brought to the conflict. All of this would be a useful resource for a game based on the Legions, but I can't help thinking that for such a narrow area, a GM might be better served finding a general book on the topic.

The same might be said for the other topic which gets an unusual amount of attention, the Roman Games. Sixteen pages cover this set-piece, both from the point of view of those participating in the games and those attending. There's more mechanics in this section, including a discussion of how to model a Chariot race at the table. But generally there's excellent and extensive coverage of the kinds of detail and issues a GM would want to have at the table. That's a solid contribution, and better than the twelve pages the book takes up with Roman Religion and Myth, half of which just covers basic myths and names of the gods.

The book closes out with a discussion of Roman Campaigns, usually something I find pretty useful for sparking ideas. There are some adventure seeds presented here, but the standard campaign frame suggestions biol down to: here's a historic era and here's what was going on- which duplicates information given earlier in the book. New approaches and details ought to be provided with those. Where GURPS Imperial Rome does get original is in the suggestions for alternate Romes-- alt history being something of a specialty for GURPS. There's some worthwhile discussion of building alternate games and campaign themes. Two alt frames are presented: the first a Roman Empire that has managed to survive until modern day and the second a Roman campaign with magic as a present force. Neither gets too much discussion and some of the more interesting ideas appear in the various sidebars throughout the sections. The ideas for cross-overs with other GURPS products are especially cute.

Overall
There's a good deal of non-mechanical game material presented in GURPS Imperial Rome and it is well written. If you're looking for a quick reference book to capture the idea of Rome, then this or Eternal Rome would be a decent choice. Perhaps you're doing a time travel or alternate society game (ala Star Trek), and don't want to invest too heavily in any one source or reference book. Then would be a useful purchase. For GMs looking for more depth on a period, look elsewhere.
Posted by Lowell Francis at 7:19 AM