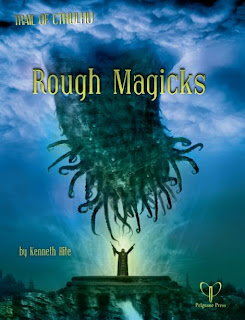 What is it?
New magic options for Trail of Cthulhu.

I Put on My Robe and Wizard Fedora
A few weeks ago I did a rundown of evocative rpg magic systems, those which added flavor to the game. Each acted as more than simply a list of spells or a build-a-blast mechanic. Call of Cthulhu's system certainly fit on that list-- tied directly into the setting with terrible risks involved in their casting. I've always found, however, a split in gaming groups' treatment of that magic. When we played CoC magic came up rarely-- it was dangerous and awful. Using magic meant using the tools of the enemy, possibly giving them more power and increasing the chance of corrupting oneself. I've known a number of CoC players who felt that way. But I've also met gamers at conventions to whom the use of magic simply meant another resource; a Shriveling spell as viable an option as a tommygun.

When Trail of Cthulhu talks about the distinction between the Purist and the Pulp approaches to the game, that's the distinction that usually comes to mind. ToC deals more directly and extensively with the question of Magick (which I'm spelling as magic for the rest of this review) in Ken Hite's Rough Magicks. Chad Bowser put me on to this supplement; I'll admit I'd just assumed it was a spell collection at first.

Which It Is, But Isn't
Rough Magicks isn't just a book of spells, nor is it just a variant magic system for Trail of Cthulhu. It provides both of those things, but it also provides a host of new ideas about magic, applicable to ToC and CoC games. And once again, even with a relatively light-weight (40 page) supplement, Pelgrane provides excellent layout and graphic design. There's an illustration featuring homemade mirror-shades that will haunt me for some time.

What Magick Means to Me
The book opens with a set of theories or “explanations” for magic- none of which are necessarily exclusive. It's an interesting discussion and a set of issues less often touched on in game materials. While it won't necessarily change any mechanics for GMs or players, it offers up a host of evocative moments at the table. The clash of theories about magic, contradictory cosmologies, and diametrically opposed philosophies serves as great fodder for NPCs. Hite provides amazing details and stories. Throwing some of these out at PCs in the course of play could open even more cracks in the shifting ground beneath their feet. Hite's stories are aimed at GM meta-thinking, with anachronistic details about universe-hacking. GMs will have to consider what those stories look like “on the ground.”

Crunch-Time
The mechanical portion of the new rules for Trail of Cthulhu comes from the creation of a new general ability, Magic. This splits from Stability, though there remains some overlap. This allows a separate development and focus on magic and makes Stability more balanced in the game. I like the concept because it introduces tough advancement choices for the players. It provides some nice options for how characters might learn magic and what those consequences might be. I ties those into the monsters and horrors of the mythos, as well as providing an overview of magic and magicians as they appear in the classic stories. It offers some new spells as well as revisiting some old spells with an eye to their dramatic potential. The new rules provide new ways to offer a “poisoned chalice” to the players.

The material is more classically “Cthulhu rpg” but the discussion does stop off to talk about how this fits in with the Gumshoe mechanics. Magic as an Investigation skills gets a brief mention and there's a nice presentation of evidence details for magic based on a number of skills. I would have actually like to have seen a little more of that, but GMs can likely extrapolate some of that from the color description on the spells.

Idiosyncratic Doesn't Necessarily Mean Crazy
Hite takes some pages to expand on a concept presented in the “Book-Hounds of London” campaign frame presented in Trail of Cthulhu-- Idiosyncratic Magick. That improvisational magic system allowed players to trade off stability as a boost to other abilities. The player must describe the weirdness they're invoking and the source of that invocation. I like it, but it's a matter of taste for GMs. It reminds me a little of a freeform version of Postmodern Magick from Unknown Armies. Rough Magicks expands that concept not through any new mechanics, but by providing spell description examples for each general ability. It's worth noting that Pelgrane plans an expansion of the Book-Hounds of London campaign frame as a stand-alone book. How much the concepts of idiosyncratic magick will play a part in that remains to be seen.

At the Master's Feet
Hite's encyclopedic understanding of the Mythos allows him to draw examples from across the stories and show how they tie into the mechanics he's presenting. He stops off to explain corner-cases as interesting variants to the system or as optional rules modules. It doesn't become pedantic-- instead you feel the authors making an effort to allow for the Lovecraftian feel. The last section of the book stops off to take a look at cultural theories of magic and how those show up in Mythos fiction. From that examination he draws out what seem to be some of the underpinnings of that magic in Lovecraft's world view. It is an interesting read, providing excellent non-mechanical source material. The book also provides a revised version of the ToC character sheet.

Portability
The most portable ideas from this material for non-Mythos occult games are the concepts of conflicting magic paradigms and idiosyncratic magic. Some GMs might find solid inspiration there. As with most of the ToC material, moving this over to CoC would be easy. There's a specific sidebar discussion about BRP conversion.

Overall
I like interesting magic systems, especially those deeply set in the game's background. I think what a user will get out of Rough Magicks depends on how magic appears in their campaign. If the players use magic on a semi-regular basis or show interest in that, then pick this up. On the other hand, if as a GM you're presenting human occult adversaries-- mad magicians and delvers into the forbidden arts-- then I'd also suggest this. It expands those ideas, offering great source material for stories.
Posted by Lowell Francis at 11:59 AM