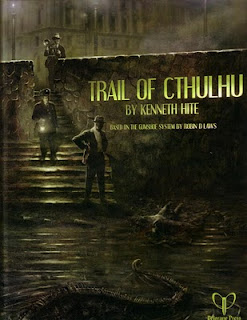 What is it?
The Call of Cthulhu rpg ported to the Gumshoe system in a 1930's setting.

First Words
This book is gorgeous; my copy is a lovely 248 page hardcover. Jérome Huguenin does a masterful job with art and layout. That art is consistent throughout-- something not to be underestimated as a key to make a game feel complete. The text has a narrow, three-column layout, but bullet-points, headers and other techniques keep it from being obscure. The paper's nice-- I mean just everything about this screams skillful execution. There's a nice touch on the cover and spine where the title text tilts ever so slightly. The first couple of times I looked at it I knew something felt off, but I couldn't put my finger on it. But it is a deliberate choice that helps reinforce the game theme.

What Does It Offer?
Interestingly, Trail of Cthulhu positions itself as another take on Call of Cthulhu, the rpg, rather than a new wholesale take on Lovecraft. I think an argument could be made that ToC has the potential to reinvigorate Call of Cthulhu as something I'd run, in the same way that Pagan's appearance on the scene with Unspeakable Oath and Delta Green sparked CoC campaigns in the 1990s. Pelgrane's supported the line extensively, on a consistent schedule. In the book itself, here's the feel of a strong hand at the rudder of the game. The author, Ken Hite, once again demonstrates his mastery of the Lovecraft Mythos and game writing.

For Call of Cthulhu Players?
CoC players have a lot of gaming options these days, with Chaosium's strong focus on monographs and pdf availability. So a new product- with a different system- has to offer a lot. I think ToC does.

*I've talked about my take on the Gumshoe system before. I like it and I think it fits readily with CoC. Any mechanical reservations I have are overcome by the benefits the system as a whole offers. That's not a knock on BRP, just that this feels well-tuned to the genre.

*Hite makes an argument for the 1930's as a truly horrific era. While there have been supplements covering the period before, ToC really moves to own it. We get a rich timeline and a gazetteer. I especially like that the focus in both cases is on strange happenings and giving the GMs interesting hooks they can use. I like when the background material is presented with the GM's needs in mind.

*Trail of Cthulhu presents great mythos material. We get an excellent overview of the big guys, like Cthulhu, without too extensive detailing. Instead we get isolated and potentially contradictory facts, in addition to a sense of how they might be used in a game. The section of creatures of the mythos-- like Ghouls, Shans and Nightgaunts-- provides sample evidence for each creature.

*Great campaign frames, discussion of cults and advice on running mystery games in general and Cthulhu campaigns in particular.

*It is the starting point for some interesting supplements: The Armitage Files offers a great campaign frame; Shadows Over Filmland, a unique horror approach; Arkham Detective Tales, police procedurals; and so on. Plus there's a number of forthcoming supplements by Hite, Hindmarch, Tidball, Walmsley and others-- all of which make my mouth water. All of which I want (and so should be sent review copies...)

For Gumshoe Players?
Trail of Cthulhu adds a number of new tools to the Gumshoe box. It provides a list of occupations, along with typical skills and a credit rating. Not strictly a “class” system per se, it does provide an easy structure for players putting together a character concept. Related to that-- and expanded from their appearance in Fear Itself (as Risk Factors)-- is the concept of Drives. Characters who avoid the impulses of their drive risk stability and taking actions in line with one's drive can offer modest protection against potential sanity loss. As described it is a simple system offering the GM both a carrot and a stick for moving the story forward. Investigative Skills and Abilities have been tuned for the setting (Credit Rating added for example). There's also an interesting choice in the addition of Stability and Sanity as Standard abilities, as Health is. Breaking those two factors apart allows the GM creative choices.

One of my favorite touches comes from the splitting of certain occupations, details, skills and rules as being either Purist or Pulp. Purist rules hew closely to the classic CoC and Lovecraftian approach. Weaker PCs, more dangerous monsters, and a greater chance of mind-blasting sanity. Pulp rules present a world where the players do have a chance-- actually managing a two-fisted fight back against the spawn of darkness. That's an honest assessment of how most people play Cthulhu games-- in my experience usually falling pretty heavily into one camp or the other. I like the idea of being able to add 'dials' to the Gumshoe material- GM guidelines for tuning the system based on genre conventions.

Newbies
Trail of Cthulhu represents the best and most comprehensive presentation of the Gumshoe system so far. That's especially true for GMs wishing to have horror elements with their mysteries. I'd recommend this to someone wanting to get a single book to have as a source for the system.

Horror games, I'd say, are also the place to start with new players who are interested in the storytelling aspect vs. the tabletop gaming aspect or rpgs. They're evocative and lend themselves to a good solid evening with a complete tale. Trail of Cthulhu's pretty decent on that count-- though new players make have to get used to the spend concept for physical actions.

There's also a Trail of Cthulhu Players' Guide available which is a nice touch.

Portability
I think Call of Cthulhu players will find something useful in this book. Horror GMs may also find useful advice and concepts. It is a core rpg book rather than a source book, but it does provide a ton of material. Also consider the reverse-- there's a ton of existing CoC material which can be ported over to Trail.

Overall
Worth buying for any gamer interesting in horror or Lovecraft.
Posted by Lowell Francis at 12:00 PM