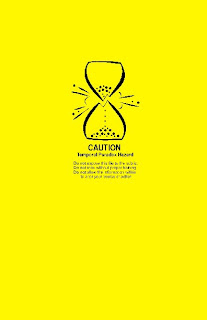 What is it? Temp workers travel in time to fix problems.

Scarier Than Primer!
I should start by saying I'm not allowed to do time travel in my campaigns anymore. That isn't strictly true-- I'm allowed if the players ask for it by name. Sometimes someone will joke about it and the other players quickly silence them. We had a somewhat 'problematic' experience in a supers game with paradox, robots and a chip in someone's head. That's a long story. Despite that we actually started talking about a time travel game the other night after I mentioned I'd seen a particularly terrifying horror movie about it.

Spoilers: it is the story of an awful villain who uses his knowledge of future events to seize control and drive others into obscurity. His depravity knows few bounds. He effectively mind-wipes the last twenty years of his friend's lives, dropping them into a world they never created. Perhaps worst of all, he raises his son and then allows that son's mind to be erased and replaced with that of an alternate reality version. Shudder.

What's All This Then?
So I had those things in mind head as I went in to reading Time & Temp, the time travel rpg of low wage office workers. I'd first heard about this a few months back when Robin Laws had mentioned the excellent physical design of the printed product. I kept it on my mental radar and then bought a copy when it was nominated for a Golden Geek. I've only purchased the pdf version, which the author has reformatted for display and printing. He describes that layout as a compromise-- it looks good, but I'm really curious about the printed version and I'll expect I'll buy that in the future.

Bring the Funny?
I should say I'm a pretty tough audience when it comes to humor in rpgs. You can get a smile out of me for things like GURPS Goblins, Toon, Paranoia, and so on. Even HOL just made me kind of shake my head rather than chuckle. I actually laughed out loud several times reading the game. It's like McSweeney's, Kate Beaton, or Jackson Pubick of the Venture Brothers wrote a game. Plus there's an off-hand Borges reference in there and that pretty much makes it a winner for me.

You're Going to Have to Come in on Saturday Begins on Monday
In the game, you play temp workers in an office dedicated to fixing errant chronological events and intrusions. There's a reason they choose temp workers, and it might not be the one you're expecting. That's the basic premise and the game riffs on it well-- going back in time and fixing problems only to return to a dreary cubicle. Time & Temp creates its atmosphere and sustains it-- even when it manages to rationalize the players' ability to speak any language and fit in anywhere (picked up in a special training seminar...)

A twelve-page employee handbook sets out the basic setting for the players, followed by about twenty pages of the actual system, then sixteen pages of General Management Policy (GM advice). The rest of the 67-page pdf is taken up with reference pages. The layout's pretty open and functional and the art is minimal but effective. A few stray typos bugged me (a hypocritical comment).

Just Roll
As a rule I'm not a fan odd odd dice mechanics in a game. I don't like moving dice around on a sheet (ala Fireborn) or keeping track of dice in a pool (ala Weapons of the Gods). I really loved a lot about Don't Rest Your Head, but the color-coded dice system-- evocative as it seems-- was a pretty significant hurdle for me. The rest of that game almost pushed it over, but not quite. Generally as a GM I want to be able to say “Roll!” and rolling ensues. However, Time & Temp has an odd set of dice mechanics with variable dice types and a couple of levels of dice result tracking. But the way that gets applied in the game and how well it fits mechanics together to the game themes really works for me. It manages to supply enough coolness to overcome my burden of proof. I part that comes from the collaborative/cooperative nature of the mechanics.

The System Itself
Time & Temp has an amusing resolution system-- any action has both Effort and Effect. Effort defines both the energy expended as well as the method. Effect defines how much will actually be accomplished. In Time & Temp, the player defines one of those two factors for a test, while the GM defines the other. Both sides get handled abstractly- so contests range from knocking an opponent out or arranging for the construction of a skyscraper. Both sides set their level at minor, moderate or major and the interaction of those two determines the die type used for the roll. The interaction doesn't end there as other players and the GM can add additional complicating factors into the attempt, adding more dice. Which in turn has the potential to raise bigger problems.

This is where it gets interesting-- and I'm leaving out quite a bit of the detail here. The end result number of an action attempt gets written into a grid. The players hold that grid- blank at the start of an insertion. Certain rules govern how numbers must be placed. The positioning of numbers can have certain effects. As a number appears more often, that number may cause a paradox die to become locked in-- adding to future complications. Having the same number adjacent on the grid can cause anomalies. On the other hand, if players can manage to arrange numbers on the grid one of a few particular ways, they can give the group a point of synchronicity. The rules provide several interesting, funny and powerful ways to use those. Actually my favorite part of that mechanic is that as a group resource anyone can expend those rare points. However if there's disagreement about a use, the point doesn't get spent. Instead the temps end up squabbling about it in the game.

I don't want to go too far into a discussion of the mechanics. I haven't talked about the impact of the characters' resumes/CV's; managing incident reports in the field; The Keeley-Sullivan Temporal Villainy Index; or how TPS (Temporal Project Specification) Reports play into scenario creation. Reading them and figuring out how they'll play out is a kind of pleasure. They're odd and gimmicky, but they really do serve the point of the story and the game. You know it is a good when when ideas start popping into your head as you read through the crunchy system part of the game. The book knows that the mechanics may feel arcane to some and so provides quick reference sheets and simple section divisions. As I mentioned earlier, the authors done some work to make the pdf version work despite it not being ideal for his purposes.

Portability
I don't think I'd use the mechanics for this game elsewhere-- though I can envision a couple of places where it might work. For example, using it to model a build up of paradox for a Mage-like game. I also don't think I'd want to move this over to another system. The author's already done the heavy lifting of creating a rich and evocative approach to the genre. I can imagine borrowing some window dressing for something like a GURPS Time Travel (or Timemaster...shudder...) campaign. But I think you'd lose a lot. Both setting and system click together well in this game.

Overall
The game's a pleasure to read-- on that count alone I'd recommend it. It's also a really new and novel approach to the genre, both in tone and mechanics. Its a good game and definitely worth a buy-- at the very least I suggest picking up the electronic version.

I can imagine fixing the problems of the errant Hot Tub would be first adventure I will run...

Time and Temp can be ordered here.
Posted by Lowell Francis at 11:00 AM