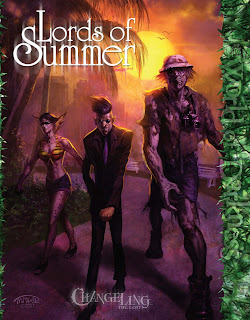 What Is It?
Sourcebook covering the society and Seasonal Courts of the Changeling setting.

Basics
Lords of Summer is definitely a GM sourcebook-- while there are a few things here such as extended contracts for each of the Courts, the vast majority of the material seems aimed at the GM. A 160 page hardcover, it follows the uniformly high design standards of the Changeling line. The text is clean, the illustrations great and the background images don't obscure the foreground text. There's no index, however, and the table of contents just lists the Prologue, Introduction and three chapters of the book.

Freeholds
Curiously, the smallest part of the book ought to deserve the most attention and material, at least from a GM's perspective. Freeholds and what they look like only takes up the first twelve pages of the book. As the defining society and central feature of most Changeling campaigns, it could support more information and ideas. The brevity does mean that most of the material is useful, but I would have liked a few more examples. As it stands we only have the single detailed example of the Miami Freehold from the core book. The text here references and alludes to a number of Freeholds, but a few concrete examples would have been useful. What's here is good, but it is bafflingly short.

The Courts
The largest part of this book, nearly half, discusses of the Seasonal Courts. It expands on material presented in the core book, including new Contracts for each Court. Individually they get about twenty pages of discussion with a presentation of outlook, philosophy, typical offices, roles, and a specific new entitlement (more on that, see below).

The Courts play an interesting role in Changeling setting. They represent the cyclical nature of life and their existence helps protect the Changelings. The Freehold exists to provide the mundane binding-together for survival, while the Courts should provide some of the magical cover. Mind you, that's only hinted at- the consequences of not having those structures isn't really addressed. There's mention that the changing of the guard and voluntary giving up of power baffles the Keepers. However in the adversaries book later we'll see that this isn't really the case. So the GM still has to decide and define the role of the Courts.

One problem lies in the fact that the Courts do represent a kind of authority in the Freehold and game world. Generally players react badly to established power structures or authority unless they're part of that structure from the beginning. Despite the free-floating nature of the Courts, some players instinctively reject them as un-American and autocratic even when they aren't. As well, this is a World of Darkness setting, so the material here suggests the worst behavior on the part of leaders. In some places you have to wonder how a Court of that philosophy could survive and rule. There's a strangeness to the structure GMs will have to puzzle out before running a campaign. Will the players be part of the Courts? Will they be below them? Will those Courts be antagonists? Judging from the tone of the material the answers are: No, Yes, Yes.

What's given here is excellent but really should be a set of GMs tools. Players who read through this may develop a distinct impression that may be hard to disabuse. GMs will find good source material and ideas with some serious clipping and trimming.

Entitlements
The last 50 pages of this books are taken up by "Noble and Eldritch Orders," or simply Entitlements in the language of the main book. These are groups or societies among the Changelings which serve a particular ideal or purpose. The new Mage: the Awakening has an additional sub-system like this called "Legacies" and I'm assuming the other nWoD books do likewise. The core book presents nine of these, with some discussion of their role, how to join them and how GMs can create their own. Entitlements offer two main benefits to Changelings: a specific like-minded community and a particular privilege such as a power, technique or Token. The groups presented tend to have a single-mindedness to them which suggest that while they would be useful to a PC they're more likely to be sources of trouble and conflict rather than succor and support.

But for me the biggest problem with them is the cosmological assumption they present. These orders exist across Freeholds and Regions and they also have an established history to them, implying a continuity. In some ways it echoes the problems of the Courts as presented. Some of the material in the game seems to suggest isolation- that Changelings keep to their Freeholds and close society for fear of drawing attention to themselves. The shadow of the Keepers ought to hang over everything- and traveling, especially alone (even outside of the Hedge) is a fearful task. Communications with someone not face-to-face would be regarded suspiciously- who knows about these people really? Could they be agents of a Keeper? Or Slavers? Few of the powers available to Changelings support the idea of communications like that, so that's not an option.

What I'm saying is that these entitlements suggest a network and society among the Changelings that doesn't work with my vision and also seems to contradict the material established elsewhere. I dislike the larger society idea in that it seems to echo more Vampire or even the old network and hierarchy of the original Changeling the Dreaming. There's also the question of how these orders interact with the political life of the Courts-- if we assume one has a larger connection, we probably have to assume the other does as well. So we get a good deal of interesting materials that we accept the meta-premise behind; jettison; or else significantly rework.

The Entitlement ideas are cool, so throwing them out is a waste. The eleven new ones presented here (plus the original nine) have great concepts. One approach is using them as personalities and backgrounds for NPCs. They don't belong to an order, but they've taken up a cause so significantly that they've obtained some power from it. They could serve as a mentor for a PC who shares their penchant. Perhaps they could be an entry point to the quest for crafting new contracts with new powers. You could take the Entitlements and make them Offices of the Courts as well.

Overall
Lords of Summer is a worthwhile Changeling book for GMs, but not for players. Players who read this may get an idea of the setting very different from the one the GM wishes to convey (or not...). Much of what's here will require rejiggering for campaigns, but that's to be expected.
Posted by Lowell Francis at 7:26 AM