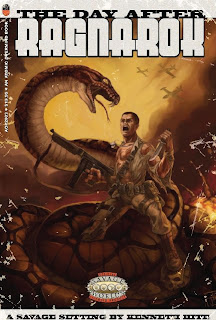 What is it?
Post-apocalypse supernatural pulp-action in an alternate 1940's.

Only Logical You'd Get Pulp After a Mash-Up
I've only run a little in the Pulp genre, though I grew up reading Doc Savage novels pilfered from my sister's shelves. I remember Daredevils and Crimefighters from back in the day, but was too stuck on fantasy or weirdness to run those things. Eventually I would run a GURPS version which took more cues from Watchmen than anything else. More recently, in light of the whole Steampunk, Thrilling Tales renaissance I ran a short campaign of Adventure!, a game I quite like. I enjoyed that fors its loose reality and strange amalgam of two-fisted adventure, noir, crime-fighting, arcane powers, and strange worlds.

But now I've finally had a chance to read The Day After Ragnarok, a beast which mashes up many things I enjoy-- wild pulp action, supernatural survival horror and strangely enough a fascination with plausible alternate history. We get a strange book which drives a highway through those genres- a wild ride as you might imagine. I should note that I'm working from a pdf of the Savage Worlds version of this setting. There's also a version for use with HERO System, 6th edition. I should stop here and note that we're living in the golden age of rpgs. I mean seriously-- all of the versions of D&D have their supporters and an active base playing them, there's a rich culture of indie games going on, and via electronic publishing we can have products like this released for several systems at once. That's something I'd like to see more companies do.

Serpentfall
Late 1945, with the German war machine pressed on all side, the Nazis activate a desperate sorcerous plan. They invoke Ragnarok and call forth the Midgard Serpent, Jörmungandr. With a head 350 miles across, the beast smashes armies, cities, land-masses, rising up from the depths and creating a massive, writhing doom. Fleets are swallowed and dripping venom poisons the air. Truman takes desperate action, launching a B-29 from Iceland armed with the single Trinity device. It flies into the mouth of the serpent and explodes.

The death-throes of the beast spill radioactive venom and blood high into the atmosphere- a hideous brew of atomic death and supernatural mutability. That spray carries, engendering horrors and poisoning the land everywhere it falls. But even worse is the massive crash as a the corpse plummets into the Atlantic Ocean and elsewhere. Earthquakes and a mile-high tidal wave destroy the East Coast of the US and befouled everywhere it touches. Central Europe, England, Egypt-- a host of countries are simply crushed under the weight of this thing. The darkness creates a year of winter.

Pulp Action
You end up with a pretty horrific post-apocalypse setting-- albeit one in an unusual time and with a supernatural source. Hite hints at more to come (Fenrir's arrival and the death of Tyr) but for the most part we're in a poisoned world trying to survive. That survival must come in the face of Commie Agents, Tainted Lands, Shambling Monsters, Political Manipulators, and Crazed Cultists. The weird tech of the setting comes from researchers developing new sciences and devices from the very body of the serpent itself (armor from its skin, eye drops from the sera of its blood, rocket packs fueled by Midgard Oil, and so on). Think steampunk or the Rocketeer by way of Cthulhu.

What Does It Provide?
Obviously a significant portion of the material is given over to the background. For the most part that's well done and evocative. My only concern lies in the specificity and detail. I typically imagine Pulp settings as fairly loose or blurry in their actual world details. Think about the specifics of something like Sky Captain and the World of Tomorrow. But Hite provides a rich set of details- especially in the opening- which may throw off the casual browser. Having some knowledge of Norse Mythology, 1940's political history, and/or Occult Conspiracies makes that less opaque. For players who fear “historical games” this could be offputting despite the fantastic nature of the setting. I'd suggest GMs work through this material and translate it for the players rather than asking them to read and track it. I consider myself pretty well-read but I found myself stopping to check wikipedia —Fimbulwinter and Sinarquists as examples.

Following the historical overview, we get the character creation section for heroes. It adds some new materials for the rules, including how to handle strange (and potentially dangerous) “Ophi-tech” created from the Serpent's Body. That's especially creepy. These 35+ pages of player materials help lay out some of the tone and focus on the game-- providing a pulp antidote to the overwhelming nature of the opening. There's more of a focus on the grit of gear, weapons and vehicles than I'd like, but that's a personal preference. Many groups will find that crunch highly useful.

GM Tools
The Gamemasters' section provides an overview of the world as it stands now, with some areas- the USSR, United States, British Empire- getting a deeper treatment. I expected Hite to provide location specific scenario hooks, but he goes another and better direction. Scattered throughout we get sets of Savage Shortlists which provide the fodder for typical pulp adventures (Best Places to be a Merc; Secret Bases; Where to Beat Up Nazis). After the obligatory adversaries chapter, there's a dynamite and lengthy section on adventure building. Hite presents a number of interesting campaign frames- ranging from classic freelancers to the more interesting community preserving and urban decay types. Mechanics for generating the sections, tropes and details of those campaigns and adventures follow. It's a pretty amazing toolbox and one worth reading through. Hite finishes out the book with a great index and some discussion about his influences and sources.

Portability
This setting could easily be moved over to other systems. The mechanics, especially as presented in the Savage Worlds version, are pretty transparent. You'd have to rework some of the Ophi-tech, consider how you want to handle magic, rework equipment and set up some structures for character creation. Most of the book is mechanics-free or mechanics-light.

On the other hand, I'm not sure the setting material itself would work ported over into another campaign setting. It could serve as a model for a world-changing event in an existing campaign. Those kinds of disasters can be a great spur for adventures or allow GMs to rework an setting which has gotten stale. TSR did a like thing with the meteor which smashed up Mystara when they wanted to redo that setting.. You'd have to rework the bad guys and their motivations but the thematics Hite supplies could be used there.

Overall
I enjoyed reading The Day After Ragnarok-- it has a good deal of historical in-jokes and references. But it is at heart a setting for cinematic and furious action. I can certainly see running this as a short-campaign to shake things up. The materials presented cleanly, with a mixed bag in terms of illustrations. If you like Alt History, Pulp, or even Occult Games then I'd suggest picking it up. Atomic Overmind has supported it with a few pdf supplements which is encouraging.
Posted by Lowell Francis at 2:39 PM