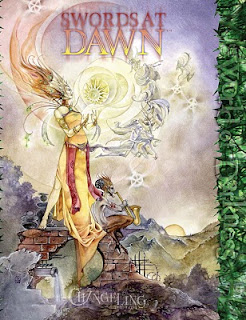 What Is It?
Diverse collection of Changeling the Lost material loosely linked by the idea of change.

Final Countdown
The last of the Changeling the Lost sourcebooks covers transitional times-- the idea of changes. Again, as with Dancers in the Dusk, that presents a fairly thin excuse to put these ideas together. It suggests perhaps a more hopeful approach than Dancers, yet opens with a large section on war and duels. Again White Wolf puts out an impressive book. I'll admit I was a little skeptical when various companies started to put everything out as hardcovers but that's grown on me. First, most of the books are more substantial, with the Changeling line coming in at 160 pages apiece. That's probably as small as I want in a hardcover; 128 pages would be the absolute bottom. These books also hold up to the wear and tear of use- the stock of the covers might get scratched, but the pages don't bend and warp which is something I'm willing to pay for in weight and price. In the case of this hardcover, White Wolf again does an excellent job with layout and solid text design. The illustrations may not be as great as some of the books in the line, but they're still excellent.

Duels at Dawn
The first chapter covers the question of warfare, mostly within a Freehold. That's a topic that needs covering, given how the books present the Courts: dominating, conniving, adversarial. Reading through makes me wonder how any Freehold could survive- but perhaps that's just the dim lighting of the World of Darkness making it more difficult for me to see. Wars between Courts are not the only ones dealt with, there's also battles between Freeholds, with forces of slavers, against loyalists, between Entitlements (called "Endowments" here?), and of course with the very forces of Arcadia and the Others spilling forth into the real world.

There's the suggestion of these stories as the climax or high points for a Changeling Chronicle, with some discussion of how those can be managed. There's also a set of scenario seeds...

Wait. I thought this was a player's book. That's what was suggested in the previous volume, Dancers, which claimed to be GM-oriented and the companion volume would be for players. Game companies: please stop doing this. Pick a direction for the material and stick with it- players book or GMs book. At least separate it or post a spoiler note.

Swords at Dawn provides a great non-mechanical assessments of the different Courts and Seemings approach war. I'm not sure entirely which audience this targets-- players planning a war? players needing advice? GMs considering this for a chronicle? The material provides some novel discussions despite this. There's some consideration of the Hedge's role in warfare, plus a number of merits and flaws for characters. Probably the more interesting part of the section comes from a lengthy discussion of the rules and etiquette of dueling. These had been hinted at in earlier books but here we finally get some solid material- though it does smack a little of a musketeer or samurai game. The section wraps up with two new war-related contracts, some Goblin contracts and some martial tokens and pledges. (43 pages)

The Loom of Fate
This section of Swords at Dawn has some of the most interesting ideas, undercut by an over-reliance on mechanics. I've mentioned before in my Changeling reviews that often the ideas presented by the narratives and stories aren't fully supported by the rules. In some case I have a hard time picturing how some of the things could even work given the limits. The new World of Darkness rules, and by extension Changeling, has a lot of very specific system details and explanation for just about everything.

That makes this section suggesting shared narrative power between the players and the GM so strange. The idea's strong- Changelings themselves are tied to Wyrd or Fate (again a terminology problem) and have been subject to the stories of the Keepers. Therefore back in this world they can see and shape those tangles of destiny, can help redirect the stories of others and of themselves. The book provides extensive discussion of patterns, elements, ideas. It echoes the Fate chapter of Dancers in the Dusk and deepens that. But all of that is subject to rolls, to modifier tables, to special merits, addiction drawbacks and the like. The game sets off in a great direction, but ultimately stumbles. Still, with work, these systems could be used. Most importantly the material here will provide many sessions of inspiration for the GM. (33 pages)

Things of Legend
Magic items and artifacts for a Changeling the Lost campaign. Again...why is this stuff in a player's book? I mean here's the thing: the chapter opens with some really powerful and story-changing items (think Eye of Vecna or The Machine of Lum the Mad). If these items were to appear in a game they would be foreshadowed, there would be dark rumors swirling, players would see the results of their power long before they ever caught sight of them, and they would have to delve into lore to uncover their secrets.

Or they could just read this book.

So a neat GM resource, but a spoiler for the players. The rest of the chapter returns to the ideas and issues of dreams, further expanding on that. Its clear that for some chronicles the dreamscape became an important factor-- given the attention paid to it later. There are some interesting dream tokens, merits, Goblin dream contracts and more conventional magic items given here. If dreams form a significant portion of your campaign, then this will be an excellent resource (21 pages)

The Coming Dawn
There's a lot to like in this chapter-- especially the opening ten pages discussing change within chronicles, both as an abstract and a specific concept. The authors suggest various campaign approaches and ideas, pairing those with a more positive take on the ideas. Where Dancers in the Dusk focused on bringing greater darkness to a chronicle, Swords at Dawn takes the opposite tact, though less explicitly. It isn't a book of happy endings, but instead suggestions for progress, forward movement and triumphs-- small and large.

The chapter also includes the Dawn Court, a Court dedicated to sacrifices for the whole and driven by the idea that the darkness can be pushed back. They aren't the shining warriors of the Summer Court, but rather a group about spirit and hope. The Contracts of Potential provided for them reflect some of those ideas, especially in the building of relationships and ties. The book ends with four new entitlements not directly tied to that, but reflecting some of those ideas. (34 pages)

Portability
Most of the material and the ideas here fit pretty solidly into the Changeling universe, with a couple of exceptions. Reworked and developed, the ideas about talecrafting as a kind of magic could be implemented into a number of strange games. GMs may also find some great stories to be told out of the artifacts presented in the book. They could take a lead role in other games. For GMs wanting to convert Changeling over to another system, there's a good number of contract sets requiring attention. The changeling-accessible tokens will also require some tuning. How talecrafting as a system gets implemented will depend on the tone of the chronicle and the system used-- I suspect it will work best with something pretty abstract and narrative driven.

Overall
This is an excellent GM's volume. The ideas here can easily be applied to an ongoing chronicle. It serves as an excellent and necessary antidote to some of the darkness which can overwhelm a Changeling campaign. That's not to say such a game can't be dark, but then the moments of hope and progress this book discusses need to be put into play.
Posted by Lowell Francis at 9:01 AM