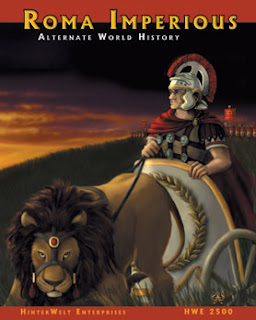 What Is It?
Alternate Imperial Rome rpg with magic.

In the Beginning
As I said when I began this series of reviews, I wanted to assess existing Rome rpg material for what they might offer a gamemaster wanting to run a “Rome” campaign. By that I meant not necessarily a historically accurate game, but one which took on that atmosphere. For my part, I expect when I finally run an Ancient Rome game it will include a great deal of the fantastic. But I want to be able to provide a consistent and interesting backdrop for the players.

With that in mind I came to Roma Imperious, one of the two significant “Alternate Romes” I planned to review. I don't include Cthulhu Invictus in this category as it doesn't posit a major historical change. Roma Imperious, on the other hand, takes place in a world with present magic and fantastic creatures. The Roman Empire has remained and has some magic operating within it. I had some high hopes for this supplement-- to see how they integrated fantasy and wizardry into the lives and history of the Roman world. In the end I was pretty disappointed.

Iridium Verison
I should mention that I'm reviewing the version using HinterWelt's Iridium system. There's also a True20 version which, as I understand, includes some new setting material. I'm not going to deal with the system mechanics for Iridium. The last 40% or so of this 338 page (in pdf) book presents Iridium as adapted to this setting; it seems pretty basic. You have classes, levels, attributes, a focus on skills, and a D&D-like spell list. But I want to concentrate on what a GM might be able to borrow or lift from this- how useful the approach to the history and setting is.

In the Details
The premise is fairly simple- Constantine sets up a group to research magic as utilized by the Druids. That bureau makes discoveries and Rome now has access to magic. The current game year is 708 A.D

It says something about the organization that it took me several minutes to actually figure out what the setting date is for this game. The historic overview ends, but doesn't suggest what's going on now. There's the odd choice to use Roman dating from the founding of Rome, in 753 BC-- so the actual game year is 1461 A.U.C. I understand going for a kind of authenticity, but I think you first owe your readers to make things clear. That's a small detail, but I think one that's reflective of the larger approach of this book. Throughout we get a lot of information, but there's little done to make it accessible to the reader. If you're throwing many new concepts around you need to provide signposts. Roma Imperious moves from section to section here without a clear sense of what's being laid out. It is many pages in before we really get a sense of what the game world might actually look like in play. That needs to come up front to sell potential players, before you info-dump all of the cool history you've built. I used to write this kind of thing and give it out to the players- elaborate historical documents that didn't have connection or purpose, just rich tasty history. And that did little or nothing to help them play at the table.

Neat Stuff Sewn Loosely
A couple of general setting things bother me- mostly the choice to set the game so late in Roman history. I understand that Constantine's an interesting figure, but having him be the spark which starts this raises some questions. In some modern fantasy the author has to resolve about why everyone doesn't know about magic. It just feels odd to have that magic appear and grow so late-- the book does tie that into the monster section with all of the magical creatures having been created or summoned by mages. That's a kind of retcon of the mythology that feels a little off to me. There are some interesting ideas but they get lost. A bigger question comes in the sense of worship. Some of the sections suggest that at least some cults have power-- so why only in the modern (to the game) era do those appear. I found myself having to go back to check or cross-check details and going "huh?" many times.

The lateness of the setting does have a couple of effects-- the game can move forward the technological level, allowing for other advances. It also allows for the creation of adversarial block empires like the Jade Kingdom (Chinese based on another whole system of magic) and Skandia as a kind of Viking/Norse analogue. It feels very patchwork-- like someone tossing together all of the cool ideas of the ancient world-- a Gamma World version of history. The actual background for the setting is only about 85 pages of the 338 page book, we then get classes for about 40 pages, and 56 pages of monsters (with stats and mechanics eating up about half of that). Then comes the Iridium rules.

After all of that, the book only provides four pages of suggestions for campaign play, plots and gamemastering. The irritating thing is that early on there's the suggestion that this book will serve as a resource for people wanting to build an alternate branching system at various times in Roman history. The logic of the setting doesn't make a whole lot of sense. Reading through I don't get the sense of magic in the setting, more the feeling that a classic D&D sense of wizards and ended up tacked on to an interesting but undeveloped riff on Roman ideas. The game wants to have all of the cool: “you can play a Praetorian Magus or an Oriental Monk or...” but doesn't really sell the setting beyond that. It feels threadbare.

Overall
I wouldn't be hard to port another system into this setting. I think I'd want something to retool the magic system. Certainly that they were able to move it over to True20 suggests that's possible. But the question would be why you would want to do that? I think the systems less of a concern then the setting as established.

I think the idea of a Roman campaign with magic as a factor is a great one. But just as some of the straight historical Rome rpg books take on too much history, Roma Imperious takes on too much chrome. There might be a few ideas to borrow-- such as how the Empire makes use of the magical technology, but those details are few and far between. Purely for a stand-point of someone looking for resources and references to help in crafting their own game, I think this is a weak choice. It isn't to be avoided-- there's some fun ideas here- but there are other first-buy choices out there.
Posted by Lowell Francis at 1:26 PM