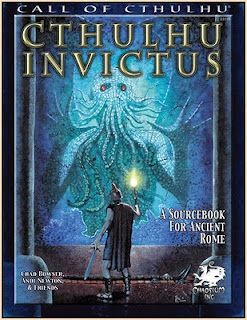 This is the second in my series considering Roman rpg materials and how a GM wanting to run a Rome campaign might use them. Cthulhu Invictus (CI) is a recent supplement providing material for a Call of Cthulhu game set in Ancient Rome. For a discussion of the purpose of these reviews, you can see here.

Shadows and Rumors
Cthulhu Invictus provides an interesting frame for any kind of Roman Game. Historically Rome took in many foreign and strange cultures. Though there are others, Robert Turcan's Cults of the Roman Empire does a nice job of surveying them and their syncretism within the Empire. I like the idea of many of these being at once unsettling and alluring to Imperial citizens. Those dealing with outsider cultures frequently would craft all kinds of stories about their practices. The treatment of the Cthulhu Mythos, rumors about strange practices, the lurking fears could serves as an model for what people's suspicions might look like. Especially in a game where the players aren't sure if the supernatural is real, such hints and suggestions could create a great sense of unease.

Surveying the Empire
The book opens with twelve pages on Rome itself and life there as a general model. Cthulhu Invictus compliments that with a timeline of Roman History and a map. Smartly, CI restricts itself to the first century CE, an approach which allows it to provide a snapshot (although still a fairly broad one) of Rome and of the Empire. Forty pages follow providing an overview of the Empire as a whole in that period. There's a nice two-page map- and that's complimented by a larger pull-out version at glued in at the end. The maps are useful and well-presented, though at least in my copy the double-page version of the city map overlaps where the pages meet. The central 1/4-1/2 inch of the map vanishes completely into the fold.

The survey of the world does an excellent job of covering the Empire. Most regions get an extensive treatment, with sub-regions and major cities discussed. The first-century focus allows the authors to provide relevant details and context. What's covered in those entries varies. This is a Cthulhu supplement so we get mention of strange practices, holy sites, libraries and the like. However that isn't presented to the exclusion of other material. In fact I'm of two minds about this. As a GM thinking about a general Roman game I find this useful. As a Cthulhu resource there's good stuff, but I'm a little surprised we don't see specific scenario hooks associated with regions- but that's a particular fetish of mine. We do get a quick list of associated cults and monsters but how much that's connected in the text varies from entry to entry. Sidebars and boxed entries add additional details such as NPCs, special societies and items.

System Specific
The Character Creation and Skills chapters cover the basics: naming,education, minor mechanical BRP tweaks, and so on. The occupation breakdown provides a rounded set of ready-made roles for PCs. These could be used as a starting point for generating NPCs. I like the discussion of the skills since they put those in the context of existing knowledge and culture. The Equipment and Combat sections provide enough details- and lists for GMs who enjoy that kind of thing. It also says something about the setting that we get several pages devoted to Roman siege weaponry-- evoking the image of a desperate legion trying to drive back Shub-Niggurath with a ballistae. There's treatment of sanity, with the consideration that violence is an engrained part of Roman life. Hence potential sanity losses for witnessing such acts should be reduced or even eliminated.

The Magic Stuff
The Grimoire section talks a little about Roman religion, followed by a treatment of Auguries. There's some discussion of the place of magicians or spell-casters within the Empire followed by some suggested spells. Some are nice, fitting with the particular setting while others are more general. A list of tomes (and things that function as tomes) follows. That's an important detail as many of the classic Lovecraftian tomes have yet to be written in this period. Most of the material here could be co-opted for GMs running a non-Mythos supernatural game. Surprisingly various Mythos gods only get a brief mention and comment in a couple of pages list.

We get some Cthulhu connections in the bestiary section, but overall the entries would fit any Roman game with supernatural elements. Charybdis, Lamia, Centaurs, and Sirens among appear here. Stats and likely territories are provided for each of the 55+ entries. Depending on the creature, the accompanying text provides excellent description, tactics, history, cultic nature, attacks or behavior. There's a nice neutral approach here which doesn't try to shoehorn all of the mythic elements into the Mythos. Instead the material is presented to stand on its won, with a mechanical interpretation of some well-known bits plus a host of obscure monstrosities.

Most of the heavily lifting regarding connections between more classic Roman mythic figures and the Cthulhu Mythos comes in the chapter on Cults and Secret Societies. These fourteen pages provide interesting adversaries or at the very least plot instigators. Here the Vestal Virgins serve a darker purpose, the Argonauts survive as a far-reaching mercenary company, and Olympians owe their origins to sacrificial magics. The material is useful and wide-ranging-- meaning that GMs will find something to fit the scope and ethos of their campaign.

The book finishes out with a discussion of the Roman Legions, a thirteen-page complete adventure, a page of scenario seeds, suggested reading and a nice tight index.

Overall/Portability
I think Cthulhu Invictus is strongest as a Cthulhu supplement. In that respect it supplies the Keeper with enough material to easily build an interesting campaign. But the book also serves well as a general supplement on Rome-- especially those who want to add a darker mythic or supernatural feel. The rules have some mechanics, but it leans to source and background material making it adaptable for other systems. The cover's one of my favorite and the art inside serves the text. If I have any significant criticism it would be that I wanted to see more in some sections, perhaps some campaign frame suggestions, more adventure seeds, specific plots tied to places described. Of course that would necessitate a much larger book, so we'll simply hope for follow-up supplements.
Posted by Lowell Francis at 10:07 PM