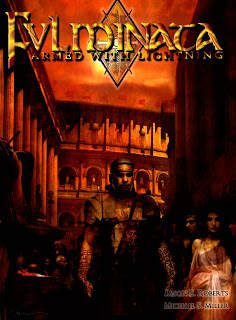 What Is It?
Alternate-history Rome setting based on the early discovery of gunpowder.

Preface
This is the last of these “Building Rome” reviews I have planned for October. Eventually I hope to do a few more. I've hit a lot of the big games available, but I've missed a few as well. I didn't get to any of the additional free Cthulhu Invictus material available on the Chaosium website; plus there's the promise of an upcoming supplement for that. I didn't cover adventures, though there are a number of them available. Probably the biggest thing I missed was White Wolf's Requiem for Rome line. When it came out I heard it was pretty deeply Vampire based rather than a useful Rome sourcebook, so I skipped it. I think it is OOP now, but eventually I may hunt down a pdf-- or perhaps they'll have their POD established by that point. In looking through Chad Bowser's Geeklist “Greek and Roman RPGs” I spotted a few other major English-language books: Pax Gladius and the classic TSR The Glory of Rome. It looks like there are a couple of foreign language games, but I'm a little surprised that the only Asterix games seem to be solo adventure play ones.

From the Ashes
Fulminata presents a simple change, with a survivor of Pompeii's destruction turning his obsession into the discovery of gunpowder. Hence the name Fulminata, from the phrase Terra Fulminata or 'earth armed with lightning'. As the author notes, while the Romans did not innovate greatly, they were experts at applying existing discoveries. The game sets its date at 248 AD, exactly 1000 years after the founding of Rome. The game uses the AUC dating scheme, making this year 1000 in the game. That's a little easier to track, but I still prefer using the conventional dates. Fulminata contains both the setting material and a game system. It clocks in at 236 pages, cleanly laid out with an open text design that invites browsing. The illustrations are simple and effective- with an excellent and evocative cover. With many of these supplements being simply Dover clip art, it is nice to see fresh and consistent artwork. I should note that I'm reviewing the second edition of the game. If you hunt for this game online note it may be listed under Fulminata and/or FVLMINATA.

The Grinding Gears
I don't want to talk too much about the system except where it impacts on a reader who is looking to borrow elements. In brief it is a low-detail, high-trust role-playing game, using d8's, which are called Talli. These dice have two I's, two III's, two IV's and two VI's. The rules suggest putting stickers on standard d8's. The simple resolution system encourages less rolling-- most task can be completed if the character has sufficient skill. Rolls are done by rolling Skill + Attribute + 4 Talli against a target number. The mechanics are simple enough they could be extracted and replaced. There's some interesting flavor there however with details like the special dice and skills being organized around the appropriate patron god. About 55 pages of the book are given over the character creation, task resolution and combat which seems pretty modest and tight.

Accessibility
Fulminata's one of the best examples I've seen of how to write a setting material. It's smartly written with an understanding that readers may find this kind of alt history overwhelming. The authors lay out the essential counterfactual scenario right away. They follow that with an explanation of their narrative approach, favoring play and believability over accuracy and minutiae. As an example, in the introduction Fulminata goes over the Roman Virtues, something I've seen elsewhere. But here it contrasts those with modern values and then walks through each virtue and how it might apply to situations. That's a nice step to provide at the outset-- giving players and GMs a descriptive rather than prescriptive framework for play.

The background material is uniformly strong-- with an emphasis on accessibility and playability. That can be seen most clearly in the treatment of women. Though the restricted status of women in Roman society is touched upon, the character (called persona) examples include several females in non-traditional occupations. Alternate history aside, there's a lot of excellent background material here. Not as in depth as some other resources, but useful and solid. The overviews provide enough for a GM to frame scenes and ideas. Throughout the authors tie in even the mechanical systems to the themes of the setting. We get chapters devoted to history, society, the military, games, and so on. Taken alone the background material would serve someone assembling a Roman campaign well.

Alternatives
This being an alternate history sourcebook, there's a focus on what's different. In this Fulminata demonstrates a slight contradiction. The big change advertised is the existence of gunpowder, called Fulminata. My expectation going in was that this might lead to a more Steam, Diesel or Powderpunk game with lots of weird technology based off of that. Perhaps it would be like a DiVinci-esque set or weapons or maybe reclaiming lost Greek technology of batteries or a fire that burns eternally for some strange engine. Nope. The Romans have gunpowder, they've managed to use it for weapons and that's allowed them to expand and sustain their influence. Only three pages are explicitly dedicated to the concept- but it appears throughout the history, carefully thought out, considered and subtle. While it feels a little odd in that the concept seems to be the selling point (and the name of the game), the authors seem to be going for a slightly shifted history.

Or not. There's another big change in this setting that gets a less attention, with only passing mention on the back cover and in the introduction. Fulminata also includes a pretty substantial and detailed system for magic. Or should I say magics as it offers several different flavors ranging from Magi to Mithraic Priests to Etruscan Diviners to other Magicians and Witches. That takes up 35 pages of the book. The details and interesting and unusual. For GMs hoping to build an evocative Roman magic system it offers an excellent starting template. It does not, however, provide as much discussion of the implications of magic's existence on Roman history-- GMs will have to do some improvisation on that.

The book closes with an adventure and a number of useful appendices (names and so on). There's a glossary and a really full index. My reservation here would be that I'd like to have more material sketching out some campaign frames. What kinds of campaigns would make use of the settings particular details? At the very least a set of adventure seeds would have been nice.

Overall
I enjoyed reading Fulminata. It has many good ideas backed by solid writing. As a general Roman resource it has a lot to offer. As a model for how one might make tweets to history or add in fantastic elements, it does a good job. It doesn't have the mad jumble feeling that Roma Imperious does. Instead it takes a more tightly controlled approach that still leaves plenty of room for cool stuff.

Probably the biggest disappointment about this game is that it appears to be out of print. The website's still up, but the last updates mention the year 2008. It doesn’t look like the games available through pdf distribution either, at least so far as I can tell. Apparently a supplement called Insulae Britannicae: The British Isles had been in the works. There's some sample art from that and the last Live Journal entries mention editing being done on it. Then nothing else. If you spot a copy, I recommend picking it up. I hope that this will be reprinted someday.
Posted by Lowell Francis at 3:14 PM