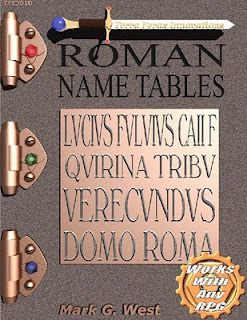 "Building" Rome Reviews
So I'm on Day 10 of my plan to write up 30 rpg reviews in October and am still on track. One of the things I want to take a look at this month are the resources available for Gamemasters who want to run a campaign set in Ancient Rome. Historical games can be tough to put together-- on the one hand straight history texts may not provide the kinds of details a GM needs to evoke that setting. At the very least they may have to weed through quite a bit to get to some usable material. I've run Georgian era England, samurai period Japan, and classic China inspired campaigns-- well, loosely inspired. In each case I shifted through a mass of less interesting material to pull out some gems.

On the other hand, rpg material for a historical setting usually touches more on the kinds of details I want as a GM. Ideas about daily life, social structures, myths as they look on the ground, concepts of magic and so on. The potential disadvantage for such books is two-fold. First, I'm a systemless adapter-- most of what I do is homebrew. So the mechanical details, rules stats and crunch matter less to me. If a sourcebook spends a great deal of time on those issues, I have to skim past. Second, if the rpg has a particular setting detail or premise beyond the history then it may be less useful to me.

The Big Questions
So my analysis in this “Building Rome” series of reviews will be on:
*What is the quality of material and presentation?
*How well the book fulfills its stated objective?
*How much mechanical material is presented?
*How much material is generally applicable to a GM wanting to run a Roman campaign?

Let Me Tell You About My Campaign...
I should say in the case of Rome, there are a number of really excellent general texts I've come across: A Day in the Life of Ancient Rome (Angela), Gods of Ancient Rome (Turcan), Everyday Life in Ancient Rome (Casson), among others. Obviously in this series I'm going to miss out on a few biggies-- but I'll try to be comprehensive. So you know where I'm coming from let me tell you about two Roman campaign ideas I have. They're fairly different ideas campaign concepts which use Ancient Rome as a starting point.

Delta Virens
The first probably draws most clearly on the ideas of Cthulhu Invictus. I'm a big fan of that supplement and I'll come to that eventually in this series. I like Richard Tierney's Scroll of Thoth series which features Simon of Gitta as a magic-wielding Cthulhu adversary in the Roman Empire. That's a fairly pulpy approach to the material. I think I'd want something strongly pulpy to do a more historical game (not a contradiction, I swear). What I envision would be characters who are like a League of Extraordinary Gentlemen or BPRD (Hellboy) group. Each has certain very specific talents which make them stand out in their field and/or isolate them from society. They would be employed by the Emperor (or some other figure) to go and seek out magical and monstrous enemies of the Empire. I could see doing something like this with a version of Gumshoe or HeroQuest.

Houses of the Sandaled
In the Glorantha setting, the Lunars appear as a kind of Roman Empire proxy. Obviously it is more complicated than that, but the basic hallmarks are there. In my fantasy campaign the players have dealt tangentially and at times directly with my reworked Lunar Empire in my heavily hacked and bootstrapped version of Glorantha. The Lunars have a right class and nobility system, which I could tune a little more closely to the original Roman structure. But there's a mention in a couple of places about the various noble houses of the Lunars having “Dart Competitions” which is a euphemism for back-and-forth assassination games. It would be interesting to run a campaign where the players create a noble house/family and characters from that house. I'd borrow community/group rules from one of the systems I discussed some time back. The point of the game would be political intrigue, gaining influence and extending the influence of the family.

To the Actual Review
I am, in fact, actually review a particular project here: the Roman Name Tables pdf. This comes from Mark G. West of Terra Ferax Innovations. So far as I can tell that publishing company has closed. This is one of a series which includes various fantasy name tables: Dwarvish, Elvish, etc. and various historical/ethnic name tables, Dutch, French, etc. They're not small volumes-- the English Name Tables book clocks in at 196 pages and the Gnomish one at 87. I purchased this on a lark from RPGNow, in part based on the discrepancy in the text descriptions. The blurbs on the nearly all of the books were cut-n-paste identical, with only the specifics changed. However the descriptive text for this suggested more material or at least more historical information in that volume. I'm not sure if that's the case; I've only read the Roman one. I don't want to give the impression that this reflects the series as a whole.

What's Actually In It
It is a systemless and setting-free supplement, cleanly laid out and edited (save for a couple of odd alignment issues). The first eight pages of the pdf covers the conventions of Roman naming-- Praenomen, Cognomen, etc. It then discusses the inheritance of names, foreigners, adoption, nicknames, simplification, and how to go about randomly generating a name. The section reads like a scholarly work-- talking about the various sources it draws on for both the ideas about naming and the examples. I've seen material of this kind presented in other rpg material, but not as extensively as this.

What follows are table after table of random Roman name tables, broken down by part of the name and other factors. In some cases the split comes between lists of common and rare versions. A section of explanation of the tribes and tribal naming of peoples in Italy is especially interesting. The author talks about each of the tribes briefly and cites sources for their mention. There's a great section which follows on names as descriptors and titles. That seems especially applicable to a fantastic game. The book also provides an extensive section of authentic cognomens tied to Nomen Gentilicium (short form: an easy list to make up names from for the GM). The book finishes with a page on how mythical beings might be named.

Portability
Have a Rome analogue in your fantasy, sci-fi or whatever game? Then you could use this.

Overall
This product goes for $3.50 as a pdf at the time of this writing. It clocks in at 73 pages. That's a bargain for something a GM could get a good deal of use out of. I'm comfortable making up names. However, if you're talking about a historical period and you want that flavor, then something like this would be useful. While other rpg materials provide some examples and discussion of naming, for persons running an extensive Roman or Roman-themed campaign it should be a definite (and cheap) buy.
Posted by Lowell Francis at 11:44 AM