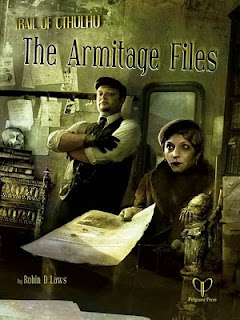 What is it?
Campaign frame for Trail of Cthulhu built around mysterious documents.

Would You Like It Open or Closed?
Published campaigns or campaign frames come in many different flavors-- and some of the classics have come from Call of Cthulhu. It's interesting to look at how much freedom/structure those supplements provide. For example, the Dreamlands book has some linear adventures but is generally a sandbox for players-- but one of specific and solid details. Another classic, The Masks of Nyarlethotep has a degree of flexibility. Investigators may end up going to the global set-piece locations in a different order from campaign to campaign. On the other hand, there's the literal railroading of of a module like Horror on the Orient Express. The Armitage Files by Robin Laws, well...it is open in a completely new way-- different from anything else I've ever seen.

Props to Them
The Armitage Files campaign is built around props, specifically ten letters. They serve as the framework and driving force of the module. That's a great concept; for my own Changeling the Lost campaign, I did something similar. I created a lengthy fake notebook filled with obscure references and arcane details at the beginning of the game. Some I had ideas about and others I planned to fill in during play. The Armitage Files is like that...only much, much better. The whole of the project makes my effort seem pale. I wish AF had come out before I put together my prop-- Laws has tricks and details I would have ransacked mercilessly for my campaign. For example, there's the minor structural detail that letters get doled out throughout the campaign but tie together in a narrative-- I would have done that. I could have handed out pages or chapters of that notebook instead of placing the whole of it in their hands at once..

Props have long been a component of published adventures, originally as simple handouts but eventually morphing into more sophisticated pieces of art. I still have all of the lovely pieces from the Orient Express module I mentioned above. Pagan, of course, made a mark on CoC players by supplying special prop packs which could be used to compliment collections like Walker in the Waste. If you're a GM today you have an unbelievable array of resources-- the work of Cthulhu Live! players; sites like Propnomicon; scrapbooking stores. All of these mean that Keepers can easily make simple props look great.

The Problem of Unlike
But that's a side point-- covering the fact that I'm a little unsure about how to talk about this resource. The Armitage Files is a unique game book. Pelgrane's once again demonstrated that they're willing to go in new and novel directions. At the same time we once again get their high standards of production, layout and illustration. I know I've spent a lot of attention on the Gumshoe line, but they keep making interesting things. I don't want to be too spoilery-- so if you're possibly a player in group which might use The Armitage Files, then I'd stop reading and instead get your GM to read this review. Quite honestly I wish I'd never read this sourcebook. Instead I wish I'd been able to come into a campaign using this without any foreknowledge. That would have been the coolest thing. Alas, I've read it now and I'm obligated to run it for others...

So, Let the Spoiling Begin
The Armitage Files is a campaign frame built around ten mysterious letters which appear to come from the future detailing a Mythos-inflicting catastrophe. They appear to have been written by Henry Armitage, the founder of the Armitage Inquiry-- itself a campaign frame first presented in the Trail of Cthulhu core book. Each letter offers a host of details and hooks, people, places, tomes, events and so on.

The secret behind it all? That's up to you. The book doesn't provide a sequence of events, beyond the appearance of the letters and even that's a suggestion. Instead those letters set up ideas for scenes, adventures and riffs the GM and the group can create. To help the GM, the supplement provides thirty-four pages of characters; nine pages of organizations; six pages of places , and six pages of Tomes. All are given a variety of options-- in the case of NPCs and Organizations, a discussion on how they might be used as allies, adversaries or neutrals. Laws makes sure that all the GM resources are easy to reference and to purpose in multiple ways.

The Armitage Files provides an improvisation based framework for an extended Mythos-based mystery campaign. Laws (and contributing writer Steve Dempsey) provide a host of advice for GMs dipping their feet into this water. On one end of the spectrum we have GMs for whom improvisation means few notes or making stuff up at the table. On the other end we have GMs for whom the concept of improvisation means a collaborative process. The Armitage Files supplies tools for GMs and groups at either end of that spectrum-- and those in the middle.

This is a smart product-- throughout it anticipates the forms and variations a campaign like this might take. The advice seems to be a precursor to some of the ideas laws would later bring to bear in Hamlet's Hit Points. Laws also realizes that for many, this kind of GMing something large without a net may be scary. He helps talk those readers down-- providing an excellent discussion of how the mystery story moves from chaos to order as possibilities get eliminated. He provides many examples-- showing how different GMs might make vastly differing story spines from the same document. The examples throughout have to be commended-- they answer many questions and look at things from many different perspectives. The entire first section of the book provides GM advice on these approaches, general as well as specific to the campaign. There's even an excellent discussion on the importance of a certain kind of player knowledge, something I wrote about recently.

Part of the reason why I consider this all spoilers is that some GMs may wish to run The Armitage Files as if it did present a linear and coherent narrative. Laws notes that as an option-- maintaining that illusion of authority and control is a viable approach to the material. But the book also allows for a completely different approach to gamemastering-- a collaborative one which really shares power. It echoes the ideas Graham Walmsley presents in Play Unsafe. I consider myself a fairly freeform and sandbox GM, but I'll admit staring over that precipice is scary. Laws makes that jump seem less terrifying and more worth it.

Portability
This campaign could easily be run with Call of Cthulhu. It is however pretty deeply attached to the Cthulhu Mythos, so I don't think it work work as well disentangled from that. I can imagine porting this to a modern setting-- but it would require retooling the handouts.

Overall
This product blew my mind. I think every GM with an interest in alternate campaign approaches ought to read it. I don't think I can say any more.

I should note that the handouts provided in the book can also be obtained in full-color versions from the Pelgrane website.
Posted by Lowell Francis at 5:49 PM